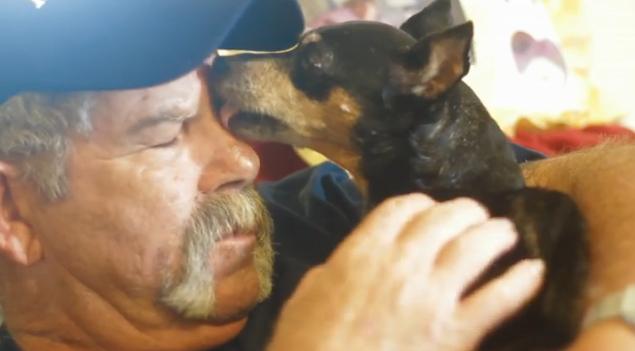 We hear lots of stories of firefighters risking their lives to save our beloved pets, so it’s only suiting that one such hero had his own life saved – by his tiny 11-pound Miniature Pinscher!

In 2005, while firefighter Curtis Young laid on the couch to rest, his MinPin, Sabrina, began acting like something was wrong. She would scratch, bite, and dig at Young’s head any chance she could get.

What’s started out as really annoying behavior by his dog eventually prompted Young to talk to a doctor. An MRI confirmed that he had a tumor, about the size of a bullet, growing in his head and pressing on his brain. Surgery removed the tumor, restoring Young’s lost hearing. A Brevard County, Florida firefighter for 25 years, Young’s hearing loss had landed him on light duty. Since the surgery, however, he passed the physical test and was able to return to fighting fires.

But, Sabrina and Young’s amazing story doesn’t end there! Just two weeks ago, Sabrina started acting strangely again. This time, whenever Young had no shirt on, she would lick and nip at a small spot on his back.

At first, he just pushed her away. But little Sabrina was again persistent.

As it turns out, Sabrina had once again found cancer. This time, a basal cell carcinoma, a type of skin cancer.

Dr. Kimberly Jennings, a veterinarian that treats Sabrina, told Florida Today that she doesn’t think Sabrina’s actions are just a fluke. Research has proven that dogs could be useful in detecting cancer cells.

“In short, at this point in time, if your dog is tagging on you, figure it out,” she said.