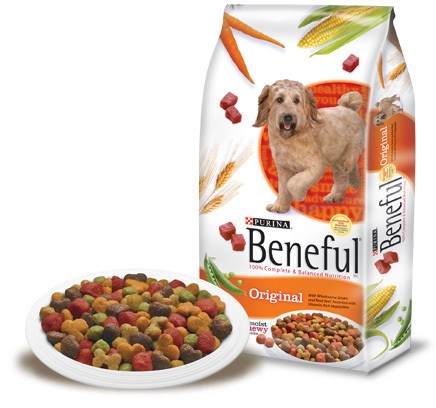 In the human food industry, there are laws against calling something healthy when it’s not. There are regulations against deceitful packaging and outright lies to consumers.

There are no such laws and regulations in the dog food industry.

That’s right, a manufacturer can fill a bag with massive amounts of sugars, animal by-products, and fillers, label the food as healthy and nutritious, cover the bag with photos of vibrant, happy dogs surrounded by fresh meats and vegetables and sell millions of bags to unsuspecting consumers that believe they’re doing right by their dog.

Such is the case with Purina’s Beneful line of dog food. Here’s how Beneful describes their Original flavor kibble:

The only truthful part of this statement is the superb taste. And that’s only because the manufacturer sprays the food with rendered animal fats, making it irresistible to hungry dogs.

In truth, the number one ingredient in all of Beneful’s recipes is corn, a commonly-used filler that provides very little nutrition to dogs. In addition to providing little nutritional value, corn has a high glycemic index, raising your dog’s blood sugar, and is not easily digested by dogs.

The next ingredient in this so-called “healthy food” is chicken by-product meal. This is essentially the waste that’s left over after the good meat has been removed: feet, beaks, undeveloped eggs, and organs (the only nutritious part of by-product) that are “unfit for human consumption.”

It’s not until the seventh ingredient that we finally reach beef. But, since beef is 80% water, when it is cooked down, it only amounts to a small percentage of it’s pre-cooked weight, meaning it could belong much further down the list of ingredients.

As if these reasons alone aren’t enough to avoid this product altogether, dog owners are now claiming that Purina’s Beneful is killing their dogs.

You’ll remember that Purina is the manufacturer of the Waggin’ Train and Canyon Creek Ranch chicken jerky treats imported from China that have been investigated since 2007, only now being recalled after illegal drug residue was found in the treats.

Are they using the same Chinese factories responsible for nearly 500 dog deaths and thousands of illnesses to manufacture their foods, too?

Since October of 2012 until now, 229 complaints have been made against Beneful dog food to Consumer Affairs.

Dog owners are reporting such illnesses as vomiting, diarrhea, excessive thirst, lethargy, weight loss, and seizures after only a few meals of Beneful dog food. Other, less-frequent complaints, have reported bloat (a life-threatening condition in dogs), liver failure, kidney failure, and even death.

According to a report by The Examiner, veterinarians have reported bacterial infections, liver and kidney failure and high toxins in pets that have been brought in related to Beneful dog food illnesses.

Clearly, Purina is ignoring the complaints by consumers (just as they did for over 5 years with their chicken jerky treats) and, as of yet, there is no FDA recall or warning on these products.

It is up to us, the consumers and dog owners, to stop supporting brands that don’t put our pet’s health and well-being at the forefront of their company mission. If we collectively take a stand against brands known for poor nutrition, questionable ingredients, and deceitful packaging, they will eventually be forced to change.

How many more dogs have to suffer because of an industry that allows them to?