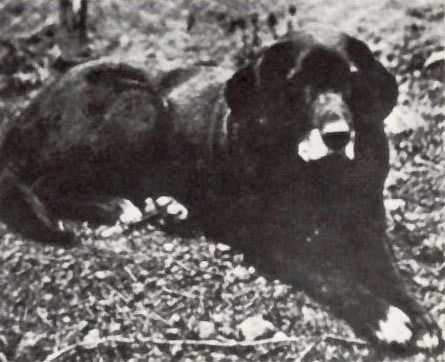 The St. John’s water dog, also known as the St. John’s dog or the lesser Newfoundland, was a landrace (a dog bred for a purpose, not pedigree or appearance) of domestic dog from Newfoundland. Little is known of the types that went into its genetic makeup, although it was probably a random-bred mix of old English, Irish and Portuguese working dogs. The number of St. John’s water dogs started declining by the start of the 20th century. By the early 1980s, the variety was extinct.

The St. John’s water dog was the ancestor of the modern retrievers, including the Flat Coated Retriever, the Chesapeake Bay Retriever, the Golden Retriever, and the Labrador Retriever. The St. John’s dog was also an ancestor to the large and gentleNewfoundland dog, probably through breeding with Mastiffs brought to the island by the generations of Portuguese fishermen who had been fishing offshore since the 15th century.

During the 19th and early 20th centuries, St. John’s dogs were exported from Newfoundland to England. These dogs were cross bred with other dogs to create the retrievers.