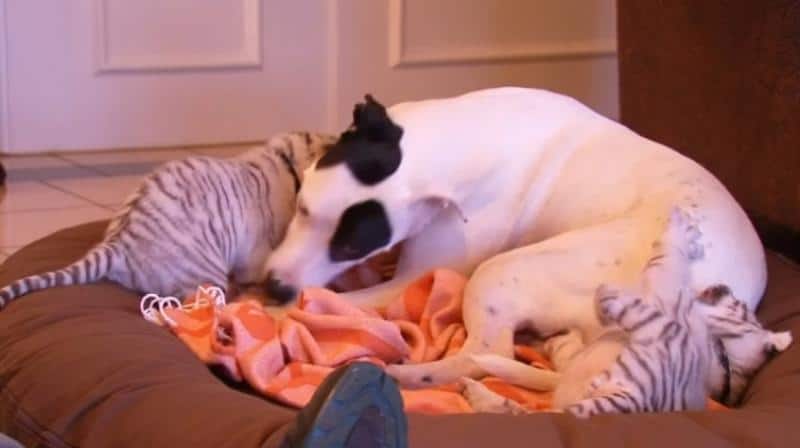 When one-month old Bengal tiger cubs, Peach and Pearl were rejected by their mother after birth, they found comfort in a compassionate and cuddly canine.

Immediately after the babies were born at the Safaripark Stukenbrock in northern Germany, zookeeper Jeannette Wurms stepped in to help the hungry cubs, warming them, feeding them milk from bottles, and caring for them in her home on zoo property – all with the help of Leon, their gentle and loving surrogate canine dad.

While the cubs are young, they’re both learning and having fun with their canine caretaker, but once they’re old enough (and big enough to be a threat to his safety) they’ll return to a zoo enclosure for their own safety and the safety of Leon and Wurms.

Wurms explained to WTHR 13 that once the cubs get bigger, “they can react unexpectedly and humans cannot deal with their violence and their strength. much too much can happen too quickly which is why they belong to a place where they are of no danger to humans but where they can develop in a way which allows them to become animals of prey.”

For now, they’re having fun with Leon, an experienced surrogate who’s helped rear other tiger cubs before.