Hurricanes, fires, floods, earthquakes… unfortunately there’s no shortage of natural and man-made disasters affecting the world today. For families with pets, the risk of losing your home is especially daunting. Not only are pet parents responsible for the safety and security of their animals, it’s substantially more difficult to find temporary shelter if you need it.

While evacuating is never ideal, especially when you share your heart and home with a small army of four-legged, furred, feathered, finned or scaled friends, it can be done. Here’s the story of how I, along with a house full of pets, evacuated my home and fled to safety in anticipation of Hurricane Irma. And, more importantly, what I’ll do differently next time. 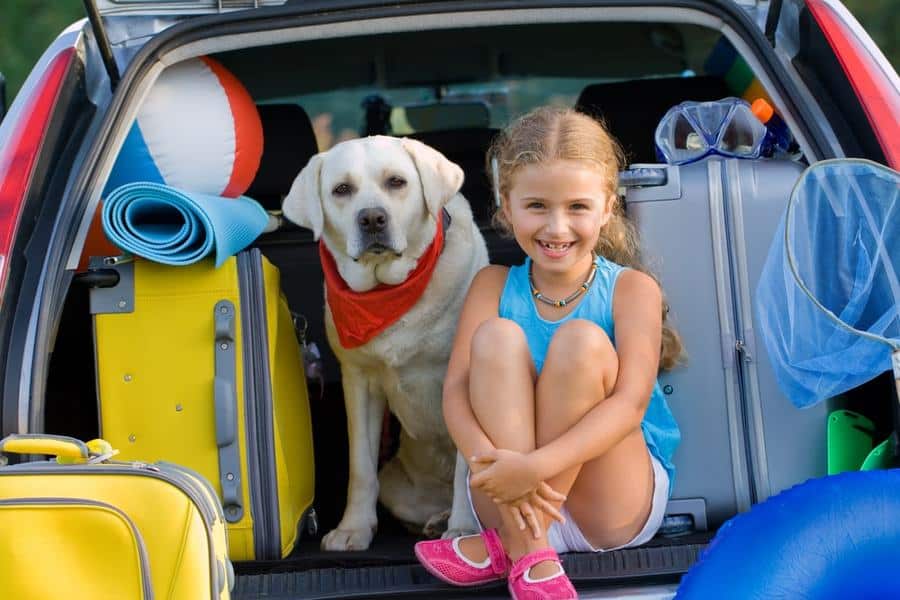 Having spent the last four decades on the Florida coast, I’m no stranger to hurricanes. More than 160 named hurricanes have made landfall in my home state since I’ve been here. And, while the powerful, deadly storms are no laughing matter, Floridians joke about hurricane preparedness involving little more than buying a case of beer and enough ice to keep it cold should the power flicker off for a few hours. This is especially true in the Tampa Bay area where I live, where it’s been almost 100 years since we’ve taken a direct hit.

I’ll admit to being ill-prepared for every single storm before Irma. But, something was different this time. Maybe it was the heartbreaking images of Houston under 15-feet of water after Hurricane Harvey made landfall just a week earlier; the hundreds of displaced and missing dogs and cats. Maybe it was the fact that my animal-family has grown exponentially in the 10 years since a strong hurricane threatened the state, but for the first time in 40 years, I was worried enough to pack up and skip town.

Forecasters began predicting a Florida landfall about a week in advance. They didn’t know exactly when or exactly where it would land, but one thing was for certain – this hurricane was going to be strong. She was moving slowly and headed toward warm waters that only serve to fuel the beast.

It quickly became clear that, no matter where Irma landed, everyone in the state would be impacted in some way – she was HUGE. Residents in the southern counties began evacuating, people from every other county began filling sandbags and boarding windows, myself included. 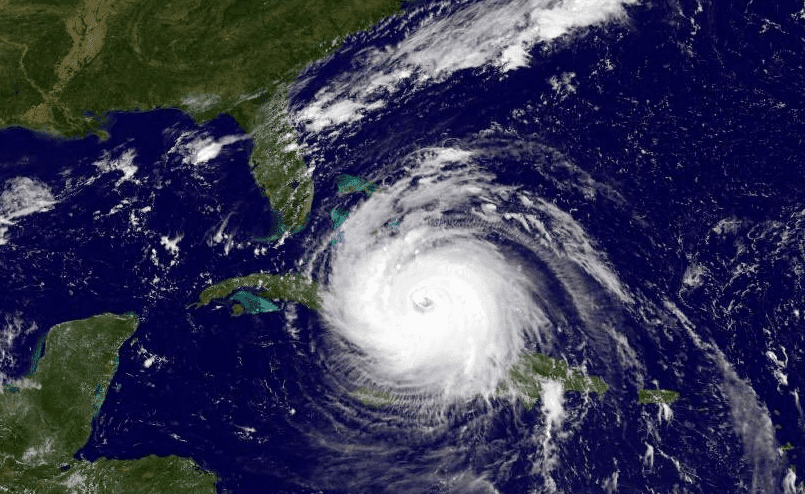 At this point I’d planned to just hunker down inside my boarded up home, under the (perhaps naive) belief that the 20 sandbags pressed firmly against the doors would protect my home, which sits a mere 6 feet above sea level, from any real storm surge. Still, I booked a room for 3-nights at a pet-friendly hotel near Valdosta, Georgia, just in case. (TIP: Many of the online travel booking websites will allow you to reserve a hotel room without paying in advance, and offer free cancellation up to the day of check-in! Thanks to this feature, I knew that if I chose to leave, I would have a place to stay and if I didn’t, I could cancel with zero expense – remember this!) 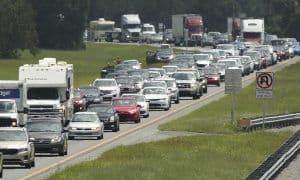 People often question why those of us in the path of hurricanes make the decision to stay home, knowing the potential disaster headed our way. Consider this: More than 20 million people reside in the state of Florida, a long, narrow state with only one way out – north. All roads north very quickly become gridlocked. And, if there’s one place you don’t want to be when a hurricane hits, it’s stranded in your car. Add to that the fact that gas is nearly impossible to find in the few days before a hurricane, the thought of evacuating becomes as frightening as not.

I filled up the gas tank, visited 6 different stores in search of drinking water, and began filling containers at home with tap water for hand washing, toilet flushing, and teeth brushing. I packed large rubber storage totes with valuables and mementos. I stocked up on batteries (so many batteries) and battery-powered fans (a Florida summer without electricity is no joke), and began filling Ziploc bags with water and stuffing them in every available spot in the freezer in the hope that they’d keep the food cold when we inevitably lost power. And I kept suitcases for myself and my daughter packed and ready to go at a moment’s notice.

But, only a fraction of my family was prepared for at this point. The rest of my family, you see, are animals: two 70+ pound dogs, a senior cat, a large green iguana, a tank-full of fish, two ball pythons, and a squirmy little hamster. And, if I wasn’t prepared to take the whole family with me, I wouldn’t leave. (With one exception… I’m sorry fish. Evacuating with a 30-gallon tank is all but impossible – but I still made preparations, we’ll get to that shortly.)

My dogs typically eat a raw diet, so I stocked up on freeze-dried raw dog food. Knowing we may be stuck inside the house (or on the road and in a hotel room if we evacuate), I also stocked up on bully sticks to keep the dogs content. The cat was stocked with food, but, like a lot of cats, will refuse to eat in a strange environment or when he’s stressed. For him, I made sure to have plenty of his favorite treats. Yoshi, the iguana, eats a variety of fresh vegetables that don’t require refrigeration, the snakes weren’t due to be fed for at least another week and a half, and Roscoe the hamster had plenty of food and treats.

I put all of the animals’ supplies, including their food, water, bowls, collars (with ID tags), leashes, waste bags, a few disposable litter boxes, toys, and treats into a large rubber tote, ready to grab-and-go if needed.

For the fish, I bought a battery-powered air pump to keep their bubblers bubbling. Although without electricity their lights and filter wouldn’t operate, the pump would keep the water moving and oxygenated. Unless my home was destroyed, they would be ok.

As Irma continued churning toward the state, I felt I was as prepared as I could possibly be. I’m also fairly certain I had amassed the largest private collection of peanut butter and sandwich bread in the country. And then, the 5:00am update from the National Hurricane Center changed everything. It looked like Irma would be heading right for me.

I decided it was time to go.

There was just one problem. Some of my family consider one another potential food sources, so piling them all together in my compact SUV would be a challenge. The dogs were easy, they just put on their travel harnesses and get belted into the backseat like usual, no sweat. The cat, though he wouldn’t be thrilled about it, would ride in his carrier next to the dogs. 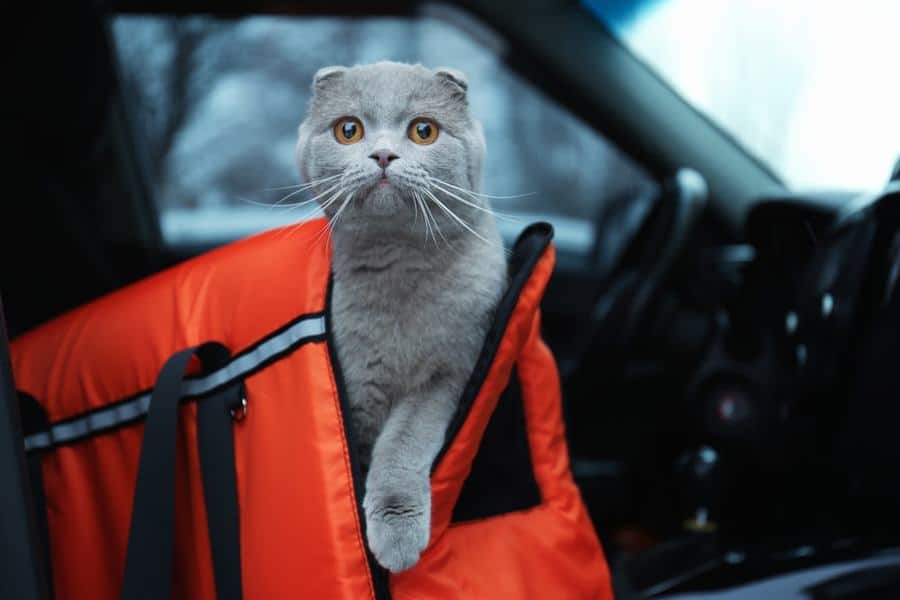 The iguana went into a hard-sided cat carrier, stacked on top of our suitcases and rubber totes in the cargo area behind the back seats, where he’d get plenty of warmth and exposure to UV light from the sun (yes, it’s a strange feeling to be evacuating under a cloudless blue sky, in a beautiful sunny day… the calm before the storm), the snakes went into Rubbermaid shoe storage boxes (with locking lids!) that I’d drilled holes into for ventilation, and Roscoe would just travel in his habitat (three cheers for small animal pets!). 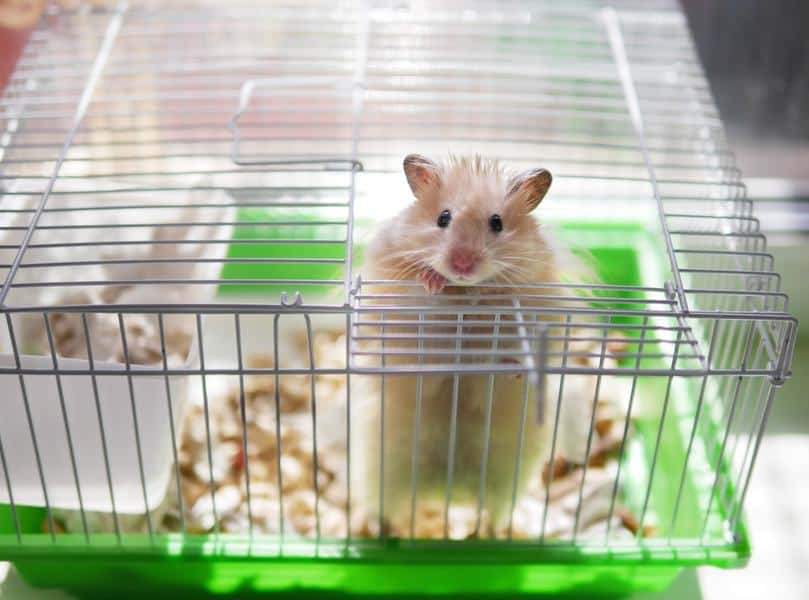 Getting everyone (and all their supplies) into the car was like a game of living Tetris.

The drive to the hotel was, surprisingly, relatively uneventful, save for the cat expressing his serious displeasure with the travel accommodations. Did you know a cat could meow for nearly 7 hours solid? Because they can. Next time, I’ll bring a CD of calming music for cats to play in the car. I seriously will not forget.

I’d booked a hotel far enough away that we’d be safe, but close enough that we’d get there on a single tank of gas. On feedback I’d gotten from friends that evacuated, I set the GPS to avoid major highways which, by now, were more like long, narrow parking lots littered with vehicles that had overheated or run out of fuel. We arrived after about 7 hours of driving, thankful that I’d made that reservation as every hotel for hundreds more miles was fully booked. 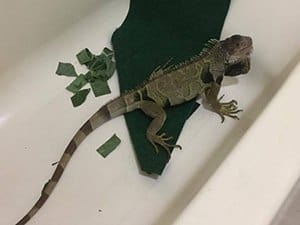 Once inside the room, I turned on the overhead heater and ran the shower for several minutes to make the bathroom warm and humid for the iguana and the snakes. Yoshi set up camp in the bathtub while the snakes stayed in their boxes on the floor. Roscoe was easy, I just set his cage on the desk. The dogs were just excited about the adventure and all the new smells. And, the cat…well, he was the most challenging evacuee, but with lots of extra attention and his favorite treats, he eventually came out from behind the bed and joined the rest of the family in our temporary home-away-from-home.

Three days later, Irma had passed, roads were reopened, and it was safe to go home. With everyone loaded back into the car we headed for Florida.

Thankfully, for me, and my family both 2-legged and 4, we came home to only minor wind damage, enough broken tree limbs scattered across the yard to build an entire second home, and a fridge full of rotting food. We were all ok, even the fish. Several days later, our power (along with our comfort level) returned.

In the end, we proved that you CAN evacuate, even with a house full of pets, even when several of those pets want to eat each other. It just takes a little planning, a lot preparation, and considerable amount of patience.