An IHG Spokesperson contacted us once more to let us know that they are now requiring all their hotel brands in the areas affected by Harvey to allow pets free of charge. They made the following statement:

“Many of IHG’s brands, including Hotel Indigo®, EVEN® Hotels, Staybridge Suites® and Candlewood Suites®, and many individual Holiday Inn Express® hotels, already are pet friendly. As IHG hotels continue to shelter individuals and families displaced by Hurricane Harvey, IHG has mandated that all its branded hotels in impacted and surrounding areas welcome pets free of charge during disasters. We have and continue to communicate this requirement to all hotels.”

At a time when hundreds of thousands of families are without homes and struggling to survive in the wake of Hurricane Harvey, one Holiday Inn franchise isn’t budging on their “no-pets” policy, refusing to offer shelter to a family’s three dogs.

On Sunday evening, New Territory, Texas resident Gillian Parker got the call that a mandatory evacuation order had been issued due to rising floodwaters following Hurricane Harvey.

Gillian, her husband Phillip, their 16-year old daughter Allison, and 81-year old grandmother Sylvia packed everything they could, including the family’s three dogs, into two cars and headed for higher ground.

Hours later, after multiple roadblocks, dead-ends, and the loss of one of their vehicles to flooding, the family of seven, 4 humans and 3 dogs, finally found a hotel with an available room: The Holiday Inn Express and Suits in Katy, Texas.

Their glimmer of hope quickly turned to shock, however, when hotel management informed the family that their three rescue dogs, Arrow (a Shepherd/Lab mix), Wiggum (a Chocolate Lab/Hound mix) and Buttercup (a Yellow Lab), would not be welcomed to take refuge inside.

“It’s ridiculous and outrageous,” Gillian told PEOPLE. ‘This is an 800-year flood. Three exits down the highway, the national guard is pulling people out of their houses. And our dogs can’t come in to safety?”

With no other options, the family spent two nights at the Holiday Inn, leaving their three large dogs outside, frightened and unable to stretch their legs inside the family’s tiny Prius, forced to sit and watch the rain continue to fall all around them.

With limited food and water and no stores open in sight, the family eventually had to turn off the car, for fear of running out of gas and becoming stranded. 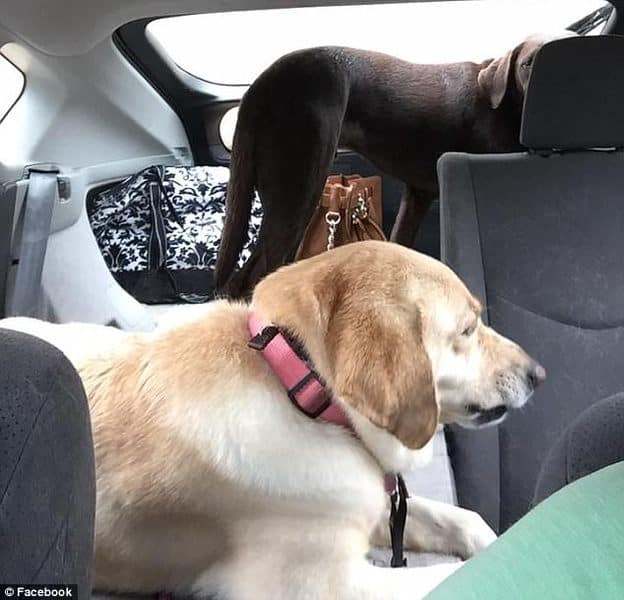 While the dogs were never alone; both Gillian and Phillip took turns staying in the car with them, even overnight, and 16-year old Allison helped walk them, helplessness eventually turned to anger.

“It’s pouring rain,” Gillian explains. “You’re soaked to the bone just getting there, and walking them is even worse. The rain felt like needles in your face. And you end up shivering in the car. It’s just… I’m just chagrined, irritated, cold, wet, tired, and exhausted.” 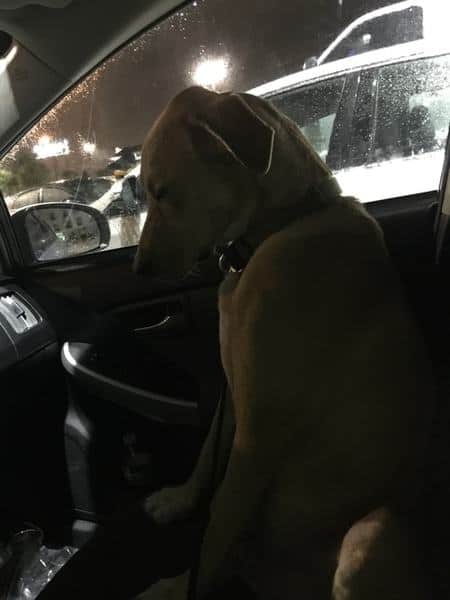 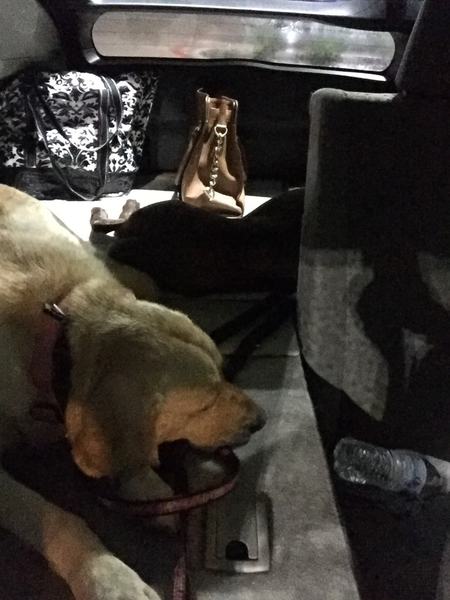 The family considered sneaking the dogs inside, but, concerned about losing their room and with nowhere else to go, they followed the rules.

Holiday Inn General Manager Jim Hernandez, refusing to budge on the no-pets policy despite the unique and horrific circumstances, said, “Our hotel is a not pet-friendly hotel. We do offer our guests areas where they can take their pets to be kenneled. There’s locations here down the street that are able to take their pets if they like.”

Eventually, around 8pm on Tuesday night, the hotel manager said he’d allow the dogs to come inside for one night in exchange for a pet deposit and a positive review of the hotel.

Around 3:30am on Wednesday morning, the family were able to move to the Marriott TownePlace Suites when a room became available. The entire family, including Arrow, Wiggum, and Buttercup, were welcomed inside.

The family eventually made their way to grandmother Sylvia’s house where they are all now safely sheltered.