In the largest payout ever awarded in a wrongful dog death lawsuit, a jury awards $1.26 million to the family of a dog shot and killed by police in 2014.

A Glen Burnie, Maryland family was awarded over $1 million after a jury agreed that an Anne Arundel County Police officer unjustly shot and killed their family dog, Vernon (Vern), a Chesapeake Bay Retriever in February 2014.

Anne Arundel County police officer Officer Rodney Price claimed that he was attacked by Vern at the home of Vern’s owner, Michael Reeves, while he was canvassing the neighborhood following a burglary. Around 4pm, Officer Price approached the Reeves’ home where he was confronted by 4-and-a-half year old Vern in the front yard.

Following the shooting, an Anne Arundel County Police investigation cleared Price of any wrongdoing, stating that the dog was aggressive. But, the Reeves family – who was not involved in the burglary that brought police to their neighborhood contested that Vern was not aggressive and did not attack or endanger the officer’s life but simply barked at the stranger entering his property.

A necropsy performed after the shooting disproved the officer’s account of what happened when he shot the dog.

The 3-day trial took place in the Circuit Court for Anne Arundel County where it was revealed that the the dog did not bite or otherwise injure Officer Price before the shooting. Price also admitted that no other steps were taken to deal with the dog before he pulled his gun and fired it twice.

“The verdict sends a strong message to the police about how community expectations,” said counsel for the plaintiff, Cary J. Hansel in a press release. “The duty to serve and protect extends to our animal family members as well. Shooting Vern was senseless, unnecessary and unconstitutional.” 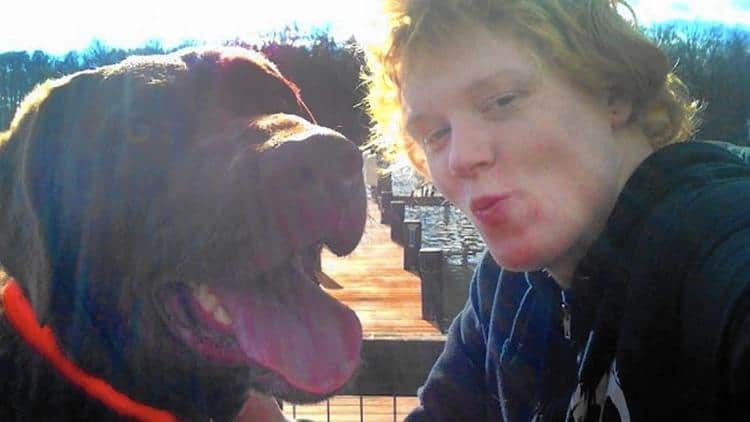 Timothy Reeves was devastated after his dog Vernon was shot by an Anne Arundel County Police officer in 2014. A jury awarded his family $1.26 million Tuesday in a lawsuit against the county. (Courtesy photo / Handout)

The historical $1.26 million verdict includes $500,000 in monetary damages. Reeves works as a defense contractor, Hansel said, and the shooting caused him to miss a significant amount of time from work. The remaining $760,000 in damages was for the anguish caused by the shooting.