Once deemed a Hollywood Hot Couple, Twilight stars Kristen Steward and Robert Pattinson are now split, thanks to Kristen’s alleged affair with Snow White and the Huntsman director, Rupert Sanders. 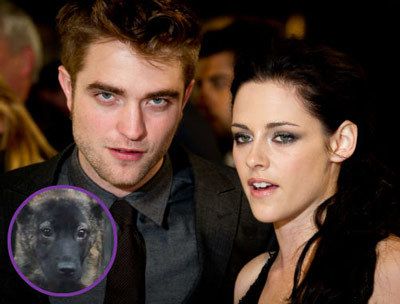 Now that Robert Pattinson and Kristen Steward have split, who will get custody of their dog, Bear? Photo credit Zap2It

But, the breakup isn’t as simple as just going their separate ways. Though they don’t have any children together, the pair together raised an adorable mixed breed rescue puppy named Bear that they adopted from a high-kill shelter in New Orleans while filming Twilight: Breaking Dawn. Now that the former lovebirds have split, a bitter custody battle over Bear is beginning.

When Robert moved out of the $6 million Los Feliz home that the couple shared, he left Bear in Kristen’s possession. And, now he is requesting ownership of the dog. But, according to the Daily Mail, Kristen, who considers Bear to be her baby, won’t hand him over quite so easily.

Kristen won’t give up Bear in a hurry. She helped Rob save Bear from Parvo disease, which nearly took its life when it was a puppy.

Kristen is now asking for joint custody of the dog, an arrangement that would complicate the breakup, preventing the pair from making a clean split.

In Hollywood and around the world, dog custody battles are nothing new. Hugh Hefner and Crystal Harris recently went to war over custody of a dog they shared as well.

Who do you think should get custody of Bear? Kristen Steward or Robert Pattinson? Share your thoughts with us below!