Massachusetts State Police captured an escaped Doberman Pinscher who was running loose along a busy highway using the most effective tool they had on hand… a bright pink stuffed teddy bear! 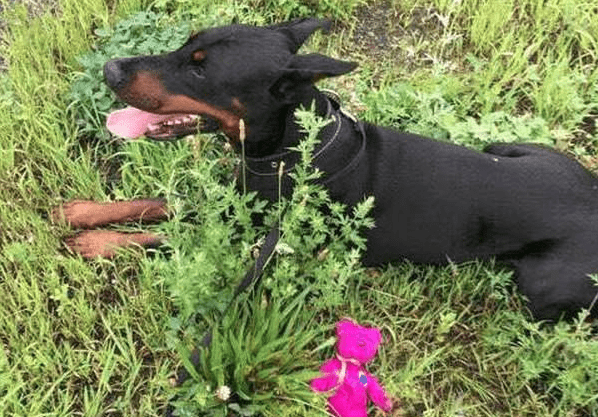 Police in Springfield, Massachusetts received several calls of a loose dog darting in and out of traffic on both sides of Interstate-291 on Sunday morning. Trooper Corey Brown quickly rushed to the scene and spotted the animal running in the left lane near Exit 5, police officials said.

Two other troopers arrived and slowed traffic while Brown attempted to capture the dog. Thinking quickly, he drove up to the dog and tossed a bright pink stuffed teddy bear he had in the cruiser.

Naturally, the dog stopped running and chased the pink bear instead.

As soon as the runaway dog grabbed the teddy bear, Trooper Brown told him to “sit.” And, like any good boy, he did just that!

Police were able to apprehend the pup and return him to his owner who lived nearby.