FacebookTwitterSubscribe
Description
The Rat Terrier, also referred to as Decker Giant, is a popular small-sized breed of dog that originated in the United States. It belongs to the miscellaneous breed group, and has been initially recognized as a well-rounded farm dog and a hunting companion. More recently, Rat Terriers are cherished as efficient house helpers, pest control aids, and engaging pets in the household. Their single coats normally come in black tricolor patterns.

The miniature size of Rat Terriers typically stand 10-13 in as measured at the withers; while its standard size usually has a height of 13-18 in at the withers. Generally, this particular breed of miscellaneous dog weighs about 10-25 lbs. 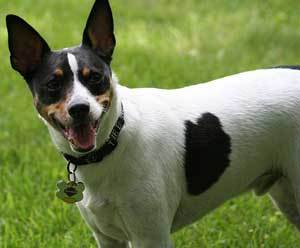 Rat Terriers are described to be less aggressive and more sensitive than the Jack Russells- the breed by which they are usually mistaken of. Members of the Rat Terrier class love staying on the sofa, sitting in their master’s lap, and playing around the yard. They are cheerful and are observed to be calm when changes in their environment and owner’s moods take place. Rat Terriers are socially sensitive dogs which make them much easier to train and live with. Nonetheless, early extensive socialization is still critical. Rat Terriers are active and bright dogs. To keep them happy, they need to receive regular mental stimulation and exercise.

Members of the Rat Terrier breed are easy to groom. Their coats are small and short; thereby making it very easy to care for. Brushing their hair occasionally is highly recommended to keep their hair healthy. Since Rat Terriers are susceptible to cold, dressing them is advisable to let them survive the cold day. Precaution must be taken in taking care of them for over-bathing and over-grooming can result to skin problems.

One of the healthiest and hardiest breed of dog is the Rat Terrier. There are only a few health problems that plague their kind because it has never been inbred and line-breed to any unhealthy state yet. Some of its health issues include the luxating patellas, deafness, and demodectic mange. Other health problems include alopecia and hypoglycemia.

Rat Terriers are small, but they have been found out to have plenty of energy reserves in their body. Exposing them to daily exercise is very important to keep them away from becoming destructive all over the house. A 30-minute activity every day would be enough to exhaust their vigor properly. Rat Terriers also like to stay outside so a walk outdoors would be necessary to let them run free. Aside from that, this miscellaneous breed loves attention. A simple pat, as well as a brief fetch session will make them very happy.