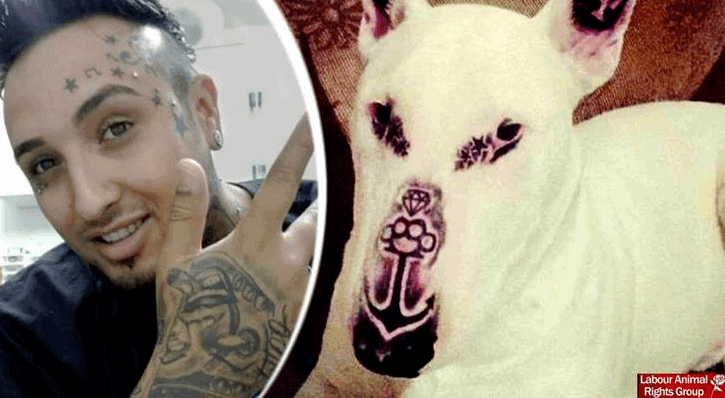 Tattoo artist Emerson Damasceno of Poços de Caldas in southeast Brazil is facing serious backlash on social media and within the veterinary community in Brazil after tattooing his dog’s face to ‘prevent it from getting cancer.’

Shortly after Damasceno posted the photos of his dog, his once furry white face and pink ears permanently inked with an anchor, brass knuckles, diamonds and stars to social media, Lawyer Fernanda Soares, disgusted by what she saw, shared them. The photos quickly went viral, horrifying animal lovers around the world.

As a result of the backlash and outrage spreading online, Damasceno deleted the photographs and took down his social media accounts, but not before explaining that he tattooed his dog to prevent him from getting cancer, that the ink would provide protection in vulnerable areas to the sun’s harmful rays. Veterinarians have debunked the theory.

Damasceno’s girlfriend defended the tattooer’s actions, claiming that vets in the Brazilian state of Minas Gerais had sanctioned the body art. The clinic in question denied any involvement and condemned the pair’s actions.

It is unclear whether Brazilian authorities are pursuing abuse charges against the tattoo artist.