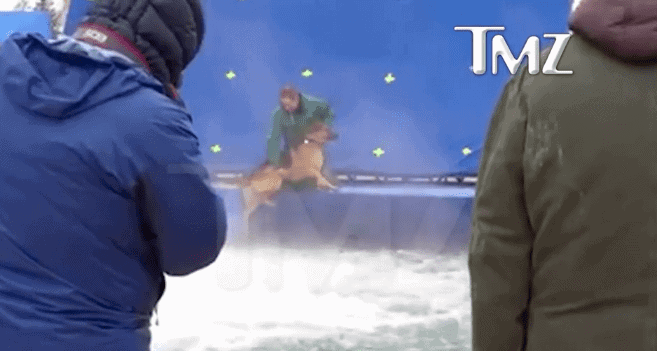 Footage of a scene shot in November of 2015 for the upcoming film, A Dog’s Purpose, has dog lovers outraged and concerned for the dog’s safety.

In the video, obtained and released by TMZ,  one of the film’s several animal actors, Hercules, a German Shepherd appears to be fearful, desperately resisting shooting a scene inside a pool of churning water and rapids. The video footage shows a dog handler appearing to force the animal into rushing water, despite the dog’s desperate attempts to remain on dry land.

The dog was eventually dropped into the water where he almost immediately submerged. It is unclear if the dog was trained to go under water rather than tread on top, but someone in the background of the video yelled, “Cut it!” … and handlers rushed to pull the dog from the water.

TMZ reports that director Lasse Hallström was present during the incident, and that at least one member of the crew was extremely disturbed by the dog’s treatment during this scene.

TMZ reached out to both Amblin Partners and Universal Pictures who said, “Fostering a safe environment and ensuring the ethical treatment of our animal actors was of the utmost importance to those involved in making this film and we will look into the circumstances surrounding this video.” Producers from Amblin explained that the dog had “several days of rehearsal of the water scenes to ensure (he) was comfortable with all of the stunts.”

“On the day of the shoot, Hercules did not want to perform the stunt portrayed on the tape so the Amblin production team did not proceed with filming that shot.”

The American Humane Association, whose Humane Hollywood initiative places a safety representative on set to ensure that “No Animals Were Harmed” during filming, told the celebrity gossip site that the representative who was on set that day had been suspended after officials saw the video.

“We are placing the safety representative who was on the set on administrative leave immediately and are bringing in an independent third party to conduct an investigation into this matter,” the organization told TMZ.

Producers report that Hercules is fine.