Police are asking for the public’s help in finding two puppies stolen early this week from a pet store in Chicago’s Arlington Heights suburb.

Just before 6 p.m. Monday, a young couple in their 20’s entered ‘Happiness is Pets’ and told the clerk they were interested in buying a dog, according to Arlington heights police.

They were playing with one dog in a pen and asked to see a second dog. While in the pen, one of the dogs made a mess, so the couple and both puppies were relocated to a different pen and left alone while the clerk went to get a mop. When the clerk returned, the couple, described as Middle Eastern or Indian descent, and both puppies, a Havanese and a Shih Tzu/Poodle mix, were gone. The dogs, valued at $2,065 each, weigh just under three pounds and are microchipped. 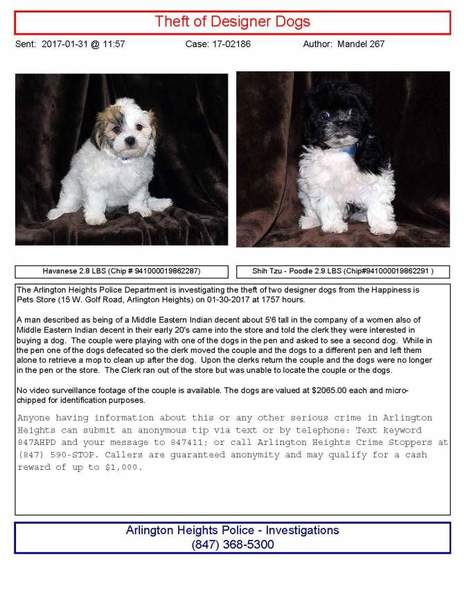