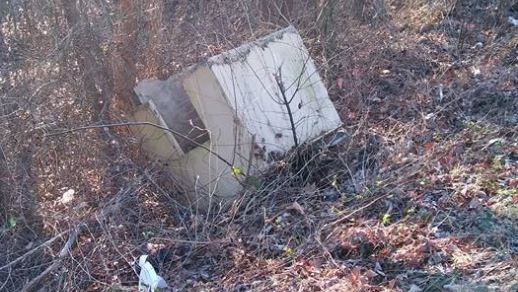 An old dog house was found tossed along the roadside near the bodies of 7 deceased dogs. Image via Facebook/Pawsitive Impact NC Dog Rescue

North Carolina authorities are asking for the public’s help in finding the person(s) responsible for the deaths of seven dogs found shot, their necks broken, and their bodies dumped along a rural road outside of Charlotte.

Pawsitive Impact NC Dog Rescue, a North Carolina-based rescue group, received a call on Friday night about several dogs that had apparently been killed and tossed along a roadside like trash. When rescuers arrived, they were shocked to find 7 hound dogs, believed to be hunting dogs, with both gunshot wounds and broken necks.

None of the dogs were microchipped and their owner is unknown.

“Every dog will leave this earth with dignity and will have a name,” they wrote. “It is the least that we could do after what some horrible human(s) did to them.”

The animals named by the rescue group: Sophie, Scarlett, Ingrid, Rhett, Clyde, Baker and Bailey. They plan to have the dogs cremated and provide a small ceremony to show that, despite the horrors they must have faced in life, they are loved.