Rescuers are hoping the public can help identify an abandoned dog found tied to a Folly Beach, South Carolina post with a heartbreaking note. 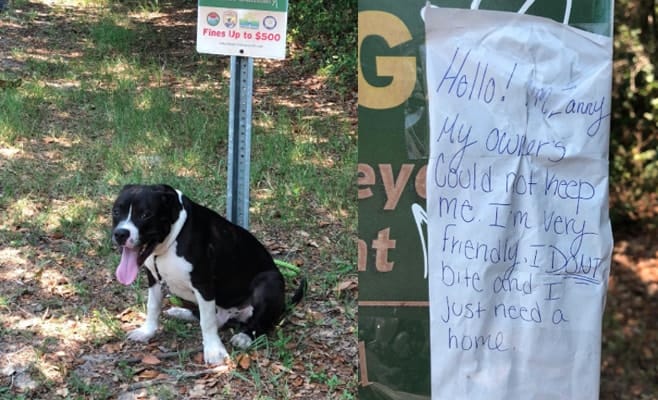 “Hello! I’m Zanny. My owners could not keep me. I’m very friendly. I DON’T bite and I just need a home,” a letter taped to a Folly Beach post read.

Tied to the post was Zanny, an approximately 9-month old black and white pit bull mix, left all alone in the blazing summer heat, without food, water, or shade.

Thankfully, passerby Tanya Niketas noticed the dog and the note at the entrance to the hiking path to the Morris Island Lighthouse and stopped to help.

“It was disturbing to say the least,” Niketas told WHAM. “They left him with nothing.” She called police and contacted local animal shelter, Pet Helpers. The shelter is now caring for the dog they’ve renamed “Folly,” and say he’s happy and healthy – and very lucky he was found when he was, before succumbing to the brutal summer heat.

Folly is now available for adoption through Pet Helpers, but officials are still hoping to find the person responsible for abandoning him in the way they did. A reward is being offered for information.

Anyone who recognizes the dog or has information about the person that abandoned him is urged to contact the Folly Beach Police Department at 843-588-7003.