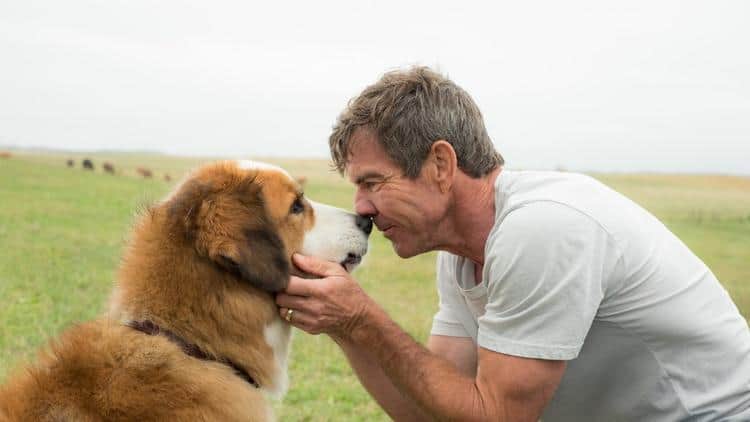 Allegations of animal abuse on the set of A Dog’s Purpose came as a particular shock to dog lovers nationwide that eagerly anticipated the movie’s release for months. Now, just over a week after the release of edited video footage that sparked the controversy, the actors, the studio, and the American Humane Association are stepping forward in defense of the film hitting theaters today.

Amid public outcry over the treatment of Hercules, a German Shepherd animal actor in the film that appeared fearful during filming while seemingly forced into a pool of churning water, actor Dennis Quaid, who stars in the film, appeared on The Ellen DeGeneres Show to address concerns.

“I don’t think this video tells the whole story,” said Quaid. “I would not be on a set that had any kind of abuse towards animals, any animals, or people.” He also added that he was not present during filming of the scene involving Hercules.

Quaid also appeared on NBC’s Today in defense of the film he’s proud to be a part of.

“This was a piece of video that was shot during the making of this. Some unknown person at the time. He also spliced, edited and manipulated that to make it look as if the dog was being abused. The dog had been in that water happily, and even afterwards too.”

Although raw, unedited video footage of the dog’s performance has yet to be released publicly, the film’s actors, director Lasse Hallström, Amblin Entertainment and Universal Pictures have all come forth in support of the movie’s humane treatment of all animals on set.

Following TMZ’s release of the edited video footage, the American Humane Association, whose Humane Hollywood initiative places a safety representative on set to ensure that “No Animals Were Harmed” during filming, suspended a safety representative who worked on the film and was present during the scenes in question, launched an independent investigation in abuse allegations.

In the statement released to Variety following their investigation, American Humane CEO Dr. Robin Ganzert said “the preliminary findings and eyewitness reports indicate that the footage was misleading and edited,” says Ganzert. “In fact, evidence supports the finding that the two scenes shown in the manipulated video were filmed at different times. Production stopped after the dog showed signs of stress and the dog was never forced to swim in the water against his will.”

Ganzert claims the ongoing investigation confirmed that “a full spectrum of rigorous safety measures was in place to protect the dog throughout this particular scene,” including one of American Humane’s Certified Animal Safety Representatives and five other individuals made up of scuba divers and animal handlers.

Despite reassurance from filmmakers and the American Humane Association, animal lovers and moviegoers remain heavily divided in their positions, with many, understandably, saying they’ll reserve judgement until full, unedited video is released.

“Of course they’re denying abuse allegations, they want our money at the box office.” a Dogington Post reader summed up. “I’ll believe Hercules was excitedly trying to jump into the water to play when they show us the raw video. Until then, I can only judge by what I’ve seen, and what I’ve seen is a dog that was NOT willfully jumping into the water as they claim.”

“They keep saying the video is edited and we’re not seeing the whole picture, but they won’t release unedited footage… if what they’re saying is 100% true, they could quiet all the noise and controversy by showing us footage of the dog happily jumping in the water, playing, wanting more, etc… so why aren’t they releasing that footage? I’m not saying I don’t believe them, but they do have a LOT at stake here and a huge PR firm telling them what to say. I want to see the unedited video,” another reader said.

What’s your opinion? Weigh in with a comment below.