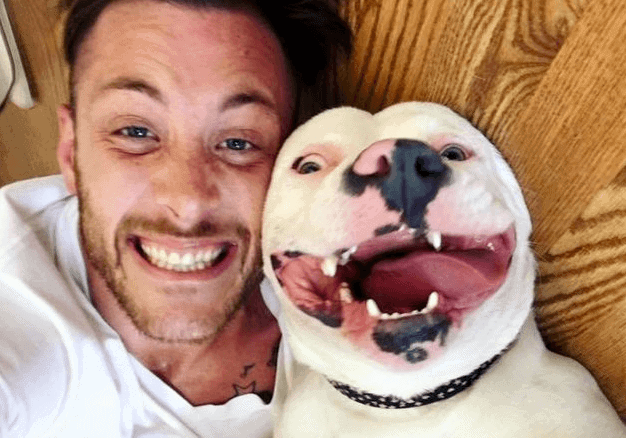 You may recall seeing the photo above making the rounds on social media. The photo, a selfie of musician Dan Tillery and his newly adopted dog, Diggy, quickly went viral after it was posted last week, and it’s easy to see why – just look at those smiles, the smiles of two beings that have just found their very best friends.

Unfortunately, the viral photo attracted the attention of a few “concerned citizens” of Waterford Township, Michigan, where Dan and Diggy live, Diggy may lose his new home.

But Diggy isn’t a pit bull, even under the township’s official definition, and he’s got the paper’s to prove it.

Detroit Dog Rescue, who adopted Diggy out to Tillery, were careful in selecting his new adoptive dad. While he was a perfect match for the smiley pooch, the rescue made certain ahead of time that Diggy was all clear for his forever home in Waterford Township. They called the township in advance of the adoption to confirm that Diggy, an American Bulldog, was not part of the township’s pit bull ban.

As long as they had evidence from a veterinarian showing that Diggy was an American Bulldog, the rescue was told, Diggy could go home with Tillery. Detroit Dog Rescue and Tillery did everything right, including licensing Diggy with the township as an American Bulldog. All seemed to fall perfectly into place and Diggy was headed to his forever home.

That is, until the photo of the blissful new friends went viral.

A few citizens of the township contacted local authorities. They thought Diggy looked like a pit bull. And, a loophole in the law is now threatening Diggy’s future. That loophole allows a police officer or animal control officer to take one look at a dog and make a “visual determination” about the dog’s breed.

The officers that responded to Tillery’s home determined, on Diggy’s appearance, that he looked enough like a pit bull to be banned, regardless of evidence that he is not, in fact, a pit bull as defined by Waterford Township.

Currently, a petition to Waterford Township to lift the “dangerous dog ordinance” has received more than 50,000 signatures.

Additionally, the rescue is urging those in support of Diggy, particularly residents of Waterford Township, to write letters and emails to town officials, hoping they’ll change their position and allow Diggy to stay.

If the township forces Diggy to leave, he will be returned to Detroit Dog Rescue. But both the rescue and Tillery want the happy duo to remain together.

Tillery and the rescue are currently awaiting a final decision by the township.