A Faulkner County, Arkansas Sheriff’s Deputy was fired after video surfaced of the K9 handler shooting a 9-pound Chihuahua-mix in the front yard of the dog’s home, within a few feet of bystanders. 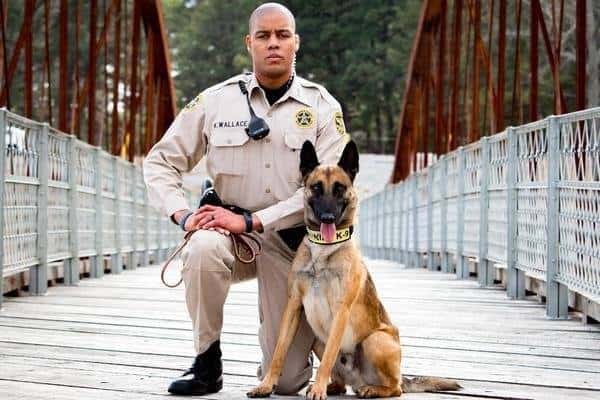 In the original video posted to Facebook, Faulkner County Sheriff’s Deputy and K9 handler, Keenan Wallace, is seen speaking with a homeowner while two small dogs are running around the front yard. Seconds later, a single shot is heard, followed by cries and whimpering from the 9-pound Chihuahua, Reeses Cup, still alive after sustaining a gunshot to the face.

Deputies said they were responding to an aggressive dog call in the neighborhood when they stopped to speak to the homeowner. A neighbor had called police to report the Chihuahuas next door were barking and running loose.

When Deputy Wallace asked homeowner, Doug Canady to come to the road to speak with him, he refused. Wallace then threatened to shoot the dog if he didn’t do as asked. Seconds later, Wallace fires at the Chihuahua, striking him in the face. He then holsters his gun and approaches Canady with his taser in hand, refusing to allow the homeowner to retreat into his home. Canady asks for the deputy’s name and badge number, and Wallace places his hand over his badge to hide it from camera view.

Immediately after the video went viral, Faulkner County Sheriff Tim Ryals placed the deputy on paid administrative leave pending an investigation into the shooting. Within a few more hours, the department announced Deputy Keenan Wallace, a K9 Officer with a police dog of his own, was fired.

Since taking office in 2017, I have been an advocate of integrity, professionalism and transparency. I hold my Deputies to the highest of standards to protect and serve the residents of our community. Unfortunately, a Deputy fell short to those standards.

I was notified Friday of an incident involving Deputy Keenan Wallace. Deputy Wallace fired his service weapon that injured an animal while in close proximity to a citizen. I believe there were numerous opportunities to de-escalate the incident.

Over the last 24 hours, at my request, Faulkner County Investigators have been working diligently to investigate whether Deputy Wallace violated any state law or our agency’s policies and procedures. While it appears no policies or laws were violated, I hold every employee within our agency to the highest of standards and will be forwarding the investigation to the Prosecuting Attorney’s Office for further review.

As a result of the incident that occurred on January 4, 2019, in the Shiloh Estates Subdivision, Deputy Keenan Wallace has been relieved of his duties at the Faulkner County Sheriff’ Office.

We in Law Enforcement answer calls every day that require split second life and death decisions. We strive to be right 100 percent of the time.

Our Department is sadden about this incident and apologize for any distress and disappointment this incident has caused anyone who was affected by this disheartening event. We will keep Reeses in our thoughts through the recovery process.

The Chihuahua-mix, known as Reeses Cup, survived the shooting, but is in critical condition and undergoing multiple surgeries to repair a fractured jaw and shrapnel injuries to his face. A GoFundMe page was created to help pay for his medical expenses.

Although Deputy Wallace was fired, he may still face criminal charges to be determined by the Faulkner County Prosecutor’s Office who are now reviewing the case.