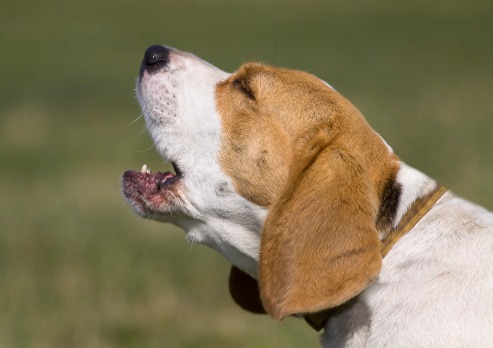 Dear Kevin,
My 1.5 year old and 8 month old Golden Retrievers bark at EVERYTHING. People walking by the yard, squirrels, the garbage truck, etc. (They only do this at home. On walks and at the park, they are much quieter) and nothing I do seems to make it stop! I don’t yell at them (isn’t that like asking a dog to stop barking by barking at it?), I offer treats and praise when they’re being quiet, I’ve tried “thanking” them for alerting me to something in hopes that they’d quiet down after knowing they got my attention and everything is ok, and I’ve even tried shaking the penny can (as suggested by another trainer), but that scared them to death and made me feel terrible! (And, it didn’t work anyway).

Because of a noise ordinance in my city, I can be fined if my dogs bark after 9pm. I’m nervous about letting them outside at night, and now I’m afraid I may have made the problem worse by bribing them to quiet down and come inside with treats when they start barking at night.

My neighbors think my very sweet, loving dogs are just obnoxious, un-trained, vicious animals and one man threatened to poison them if they barked at him walking by again. The problem isn’t just annoying anymore, but now their safety is a concern.

What am I doing wrong?
Sincerely,
Jennifer

Hi there Jennifer,
One thing that could help this right off the bat would be increase exercise. In theory if they have less energy in them, they have less energy to bark at things out of the window. From a training standpoint I am going to recommend something similar to what you mentioned but with some important variations.

My first goal when working with dogs and distractions is to get their attention on me. The cue I use for this is their name. The way this works is you say the dog’s name and then the dog looks up at you. Directly after the dog looks at you it is very important that you say your praise word followed by a high value reward. A high value reward to a dog is something like string cheese, hot dogs, turkey, toy etc. Make sure not to repeat the name. If the dog does not look when you say it once, make some sort of other noise to get its attention. It really comes down to finding what your dog(s) will work for.

When teaching this cue in the beginning it is important to start with no to minimal distractions. Start off really easy and once the dog(s) is getting it increase the difficulty of the distraction. This is going to be important because if you try to just jump to a very difficult distraction you will not have much if any success.

When the Attention Work is very solid use it on these distractions out of the window. It will go something like this:

Dog barks out of window.
Human says name of dog,
Dog looks up at human,
Human says “good boy” (or something like that)
Human rewards with a high value reward.

Your dog(s) will start to catch on to this game. The dog(s) may start to anticipate its name being called and start to look at you. If this is the case, every time the dog(s) looks through the window and sees something it usually barks at, and does not bark, say “good boy” and reward.

With all of the repetition of saying “good boy” and then being rewarded, you can start to faze out having to say the dog(s) name by using “good boy” because they know exactly what comes after the it. It will look something like this:

From a punishment standpoint what I would recommend is using a leash and removing the dog after it barks. Do that for about 5 minutes and then let it back in that room if you choose. I would stay in the room and reward the dog if it looks and does not bark, or do the same punishment if it does bark. If you are very strict with this it can help a lot. You can use a phrase such as “Too bad” just after the bark and just before you remove the dog. I would focus on doing the first protocol I mentioned primarily. But don’t be afraid to use both.

Thank you for the question!
Kevin Duggan CPDT-KA

Kevin is a Certified Professional Dog Trainer through the Certification Council for Professional Dog Trainers (CCPDT.org)  and is a Canine Good Citizen Evaluator through the American Kennel Club. He currently resides in Ohio with his dog, V, a six-year-old Shepherd/Lab mix, where he operates All Dogs Go To Kevin, LLC, specializing in helping build positive relationships between humans and their canine companions using clear communication, not pain and fear. For more training tips and tricks, and to meet his amazing dog, V,  follow him on Facebook by clicking here.