FacebookTwitterSubscribe
Description
The Boston Terrier, also known as the American Gentleman or Boxwood, is a very well-liked breed of dog that originated in the United States of America. The breed belongs to the Non-sporting category which is a varied group. It consists of dog breeds distinct for their personality and appearance. Boston Terriers are small and have been bred for the purpose of companionship. Their coat is smooth and has colors that are predominantly brindle, black or seal with white spots.

Both the males and female members of the Boston Terrier breed share the same weight of about 10 to 25 lbs., and a height of 15 to 17 in measured at the withers.

Boston Terriers are typically gentle yet strong. They are happy-go-lucky, and have a friendly personality. The breed is commonly eager to please their masters, and can be readily trained. While initially developed for fighting, Boston Terriers were later bred to become companions. 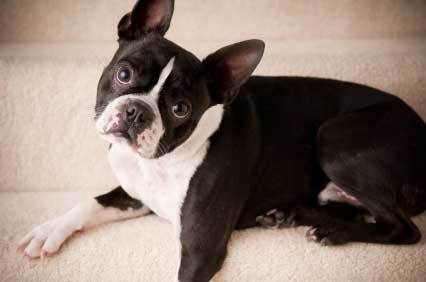 Modern members of the breed are known to be alert, expressive, and very well-mannered. In fact, both the male and female Boston Terriers are typically quiet, and tend to bark only when needed. This makes them excellent apartment pets. Boston Terriers enjoy being with people, and become the center of attention. If socialized properly, the breed can get along very well with children, with the elderly, and even with other pets.GroomingBoston Terriers are easy to groom. Their smooth coat only requires occasional brushing. As a matter of fact, a damp cloth can already be used to clean them up and improve their short hair. To help protect them from infections, regular skin and eye check-up, as well as nail-trimming would be highly advisable.Health ConcernsMost members of the Boston Terrier breed have the propensity to wheeze and snore. They are normally intolerant to excessive heat which makes them really prone to heat stroke. The breed can also be plagued by heart diseases, thyroid problems, deafness, several skin and eye infections, epilepsy, seizures, and luxating patella. Even over-exercising can lead to respiratory ailments. However, with proper diet and regular exercise, Boston Terriers can live for as long as 10 to 14 years.

This particular trendy breed of small-sized dog requires an indoor living environment. They are generally one of which is considered to be best apartment dogs. Boston Terriers can thrive very well in large cities. They love to run from room to room and play in the yard. They usually tend to crave the attention of their owners. They enjoy playing games, and spending a time with their family. In addition to that, the breed requires exercise on a regular basis. Short walks would be great.