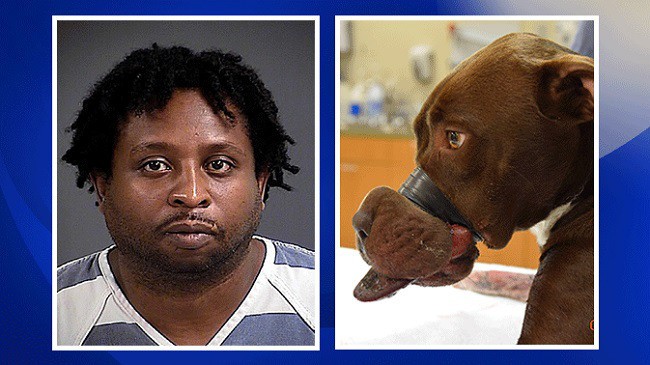 Just one day before he was set to face sentencing for the 2015 abuse of Caitlyn the dog, William Leonard Dodson was sentenced to 15 years in federal prison on unrelated weapons and drug charges.

The 43-year old North Charleston, South Carolina man has been behind bars since June 2015 when his dog, now known around the world as Caitlyn, was found with electrical tape tightly wound around her muzzle, limiting her breathing, restricting blood flow to her tongue and face, making it impossible for her to eat or drink, and inflicting serious, life-threatening pain and suffering.

In March, 2015, Dodson was arrested after fleeing from North Carolina police after a traffic stop. While running from police, he tossed a Baretta 9mm handgun, along with marijuana and cocaine. He was captured and arrested. While out on bond two months later, he purchased Caitlyn, then named ‘Diamond’ from a neighbor for $10. Two days later, when her previous owner stepped outside to leave for work, he found his former dog on the front porch, her muzzle taped shut. Apparently the dog had returned to the only home she knew for help.

Dodson was arrested in June, 2015, a week after Caitlyn was found and, with assistance from Caitlyn’s original owner, the abuse was traced back to him. He pled guilty to felony animal cruelty charges and the bond on his unrelated drug and weapons charges was revoked. He has been jailed since June 2015 while awaiting sentencing in multiple cases.

Dodson will stand before a judge again on Friday, March 24, 2017 for sentencing in the Caitlyn case. Dodson faces between 180 days and 5-years in prison and up to a $5,000 fine for the felony animal cruelty charge, but it is unlikely additional time will be added to his current 15-year sentence. 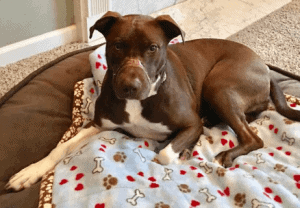 Caitlyn is now healthy and happy, though she still deals with the psychological effects of her abuse. Image via Charleston Animal Society.

Now, nearly 2-years after her horrific ordeal, Caitlyn has recovered from multiple surgeries, including having a portion of her tongue removed, thanks to incredible care by the Charleston Animal Society and supporters around the world.

Although her physical wounds have healed, she continues to suffer lasting psychological effects, including trust issues around certain men. Caitlyn is currently living with a permanent foster family that includes children and a canine pal named Oreo. The Charleston Animal Society will continue to pay for her medical care for life. The rescue posts updates about Caitlyn frequently to their Facebook page.

Although additional charges for Dodson are unlikely, Charleston Animal Society CEO Joe Elmore argues that the full maximum sentence should be handed down.

“It was attempted murder,” he said. “If a good Samaritan hadn’t called it in, Caitlyn would have died an excruciating death. … It was cruel. It was premeditated. It was despicable.”