It could be a first for the White House, whose staffers have seen everything from Beagles to Bouvier de Flandres and Great Danes to great Mutts. But, 2017 could be the first time a Goldendoodle calls the White House home!

When President-elect Donald Trump moves into the White House in January, animal advocate and philanthropist, Lois Pope is hoping a 9-month old Goldendoodle will join him. Currently, the future First Family does not have any pets, but that will all have to change if Trump doesn’t want to end a 150-year tradition of First Pets in the White House! 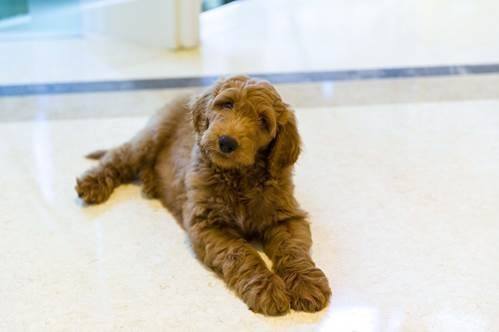 Pope, who advocates for veteran and animal causes, currently has a 9-month old Goldendoodle who, she says, will make the perfect First Dog. Pope, who has known President-elect Trump for decades, reportedly contacted him about the dog in writing before showing him a photo of the dog at the family’s Thanksgiving festivities.

“He said, ‘Go over there and show it to Barron,’” Pope told The Washington Post, referring to Trump’s 10-year-old son. “He said, ‘He’s going to fall in love with him.’ He said, ‘Barron will want him.’”

Pope said when she showed a photo of the fluffy gold dog to Barron, his face lit up. “This big smile came over his face, and it just brought tears to his eyes.”

Although no official decision has been made, Pope is confident that the Trumps will share their future home with the puppy she named Patton, after the World War II General that Trump has said he admires.