The Dalmation, also known as Dalmatiner, is a well-liked breed of large, muscular dog that originated in Yugoslavia. It belongs to the Non-sporting breed family which is remarkable for their distinctive built, personality, and appearance. Dalmations have been bred to become guard and coach dogs. Their short, dense coat comes in predominantly white color with distinctly defined round spots. These spots may be black, liver brown, dark blue, lemon, brindled, solid white, sable, or tricolor.

The male members of the Dalmation breed commonly stand a height of 22 to 24 in at the withers, while bitches are slightly smaller with a height of about 20 to 22 in. The breed generally has a weight of approximately 55 lbs. 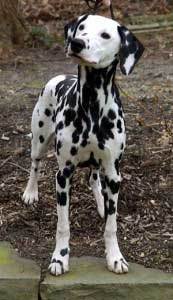 Dalmations, in general, are dogs with considerable amount of energy and stamina. In fact, they do not like to simply sit around all throughout the day without doing anything. They are known to be happy, playful, and easy-going. However, they usually have the propensity to become clingy and quite destructive when bored or lonely. They are intelligent and very dedicated pets who need human companionship and a lot of leadership. The breed loves to play with children, though can become too excitable for the very small ones. They are likely to become wary around strangers, and rather hostile with other animals. Dalmations basically require proper socialization and leadership from their owners in order to behave well and get along with other household pets. In addition, the breed has the tendency to become high-strung when insufficient mental and physical exercises have been provided.

Dalmations generally require minimal coat care. Nonetheless, because they tend to shed all throughout the year, de-shedding sessions carried out regularly is recommended. To keep their coat from being damaged, bathes should be scheduled not too frequently.

Deafness is one of the most common health complications associated with Dalmations. As a matter of fact, approximately ⅓ of their population is either partially or totally deaf. They are also likely to suffer from skin allergies and urinary stones. Nevertheless, with proper care, diet, and exercise, the Dalmations can live for as long as 12 to 14 years. 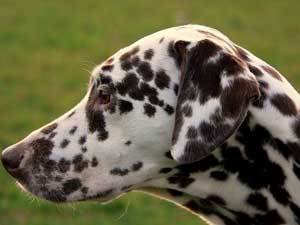 Because Dalmations are very energetic; owners are encouraged to provide them with a securely fenced yard. They are not suited for apartment-living, and tend to be intolerable of cool climates. The breed has to be given a warm bed for sleeping. In terms of exercise, Dalmations are quite demanding. Owners have to plan various activities to meet their exercise requirements. Jogging as well as interactive play time is highly recommended.