A dog found a happy ending to a tragic story after she was surrendered to a Missouri shelter with a heartbreaking suicide note written by her owner. 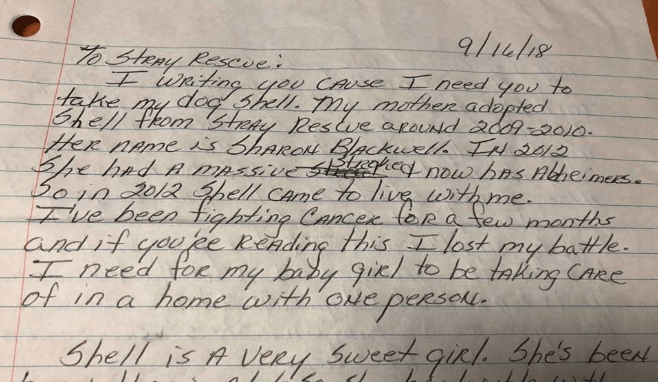 Stray Rescue posted the heartbreaking suicide note last week, with the promise to honor Shell’s owner’s wishes and find her a loving home.

To Stray Rescue:
I am writing you cause I need you to take my dog Shell. My mother adopted Shell from Stray Rescue around 2009-2010 … In 2012 she had a massive stroke and now has Alzheimers. So in 2012 Shell came to live with me. I’ve been fighting cancer for a few months and if you’re reading this I lost my battle. I need for my baby girl to be taking [sic] care of in a home with one person.

Shell is a very sweet little girl. She’s been threw [sic] a lot so she has trouble with trust in the beginning. She loves to cuddle but doesn’t like to be carried. She’s very smart.

Shell’s owner was found dead inside her apartment Wednesday, shortly after leaving Shell at the shelter. Police ruled her death a suicide. She had been a Metro bus driver for 18-years and had beaten breast cancer several years ago but was facing another battle with cancer. Before passing, she wanted to make sure her beloved dog would be cared for.

Dedicated to honoring those wishes, Stray Rescue determined to find the perfect adopter for Shell. Combing through dozens of applications from animal lovers touched by her story, the shelter found a perfect fit.

On Thursday, the rescue announced that Shell was adopted by a woman who had lost her beloved Stray Rescue pup last July.

Anyone struggling with depression or thoughts of suicide can get help by calling the National Suicide Prevention Lifeline at 1-800-273-8255, visiting this website or by texting HOME to 741741.