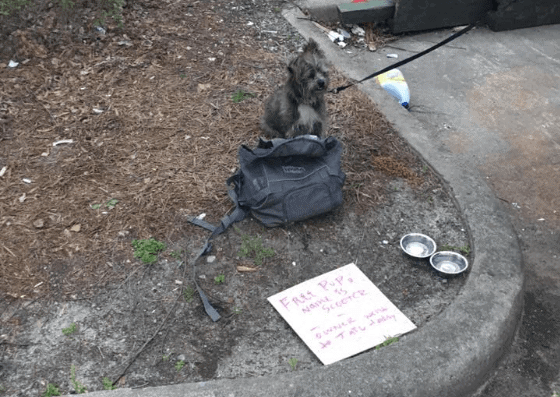 When a man found himself in trouble with police, he left his beloved dog in the care of two friends who were with him at the time of his arrest. Not long after he was taken away in the back of a police car, his so-called friends did the unthinkable – they ditched his dog in a parking lot and disappeared.

The dog was found abandoned in the parking lot of Muv Fitness in Lexington County by Blanca Anahi Cushman and her cousin on Tuesday. Along with the lonely dog was a duffle bag, two empty bowls, and a piece of flooring tile with a hastily scrawled note that read, “Free pup. Name is Scooter. Owner went to jail today.”

Cushman rescued the abandoned pup and posted his photo to Facebook with the following explanation:

My cousin just found this dog tied to a tree at the back of Muv Fitness West Columbia and we don’t know where to go from here…clearly the owner is a piece of garbage and left the dog here. It’s getting dark and I don’t want to leave him does anyone have any ideas please, i can’t keep the dog for the long term.”

After news of the abandoned dog spread, rescuers from South Eastern Homeless Animals stepped up to help. They scanned Scooter for a microchip and discovered that he belonged to 25-year old Eric Dugwyler, a Colorado man who’d been arrested earlier in the day on marijuana possession charges. 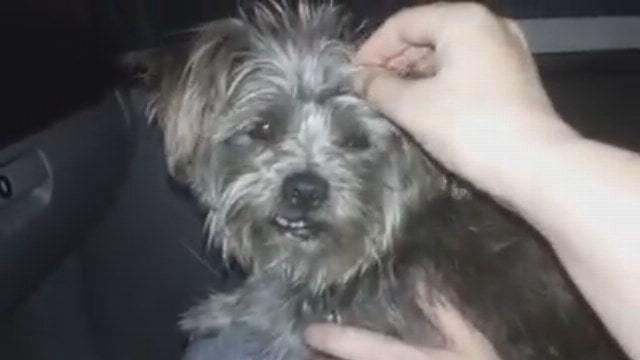 When he was arrested, Dugwyler was given the option to either have his belongings – including his “most prized possession,” his dog, Scooter – held by police until he bonded out of jail, or, to leave his things with friends. Raymond Laskowski, 38, and Allison Laffere, 22, were put in charge of Dugwyler’s belongings and given strict instruction by police to ensure that Scooter was kept safe. They tied him to a pole in a nearby parking lot shortly after the exchange.

Scooter is a happy, healthy 6-year old pup who has been very well cared-for his entire life. He is headed back to Colorado with Dugwyler’s mother while his human remains in jail in South Carolina.

Meanwhile, police have issued warrants for the arrest of Raymond Laskowski and Allison Laffere for abandoning the dog. The pair’s whereabouts are unknown and anyone with information is urged to contact the West Columbia Police Department.