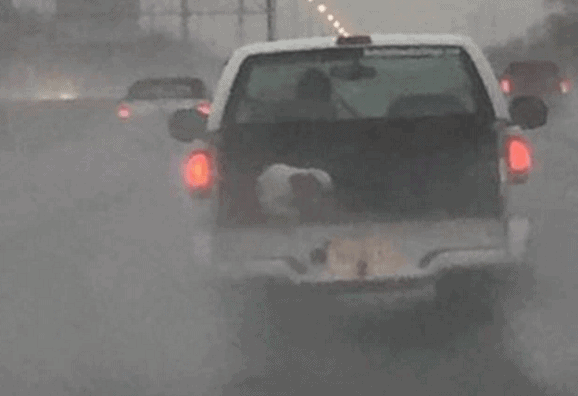 Facebook user and animal lover, Karin Demo was horrified when she spotted a pickup truck driving along Hwy 465 in Indianapolis, Indiana during a severe thunderstorm, with a soaked, frightened Bulldog curled up into a ball in the truck’s bed.

She snapped a photo and posted it to Facebook, where it quickly went viral.

“Lightning and thunder and your poor dog is curled up in the corner of your truck bed while no one is in your passenger seat,” Demo wrote. “Pure torture.” 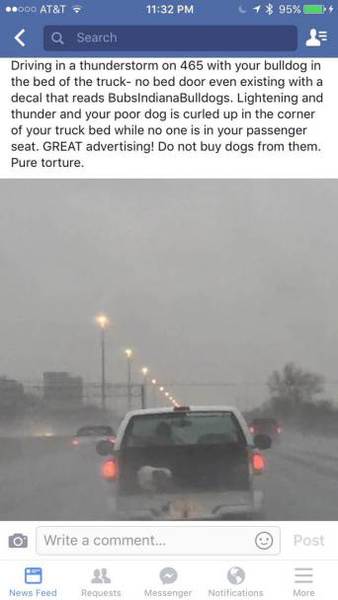 But Blake Heidelberger, the dog’s owner, had an explanation for the picture. He told FOX59 he was out and about when the dog got into a pond and ended up soaked and dirty. Heidelberger put the dog in the back of the truck for the ride home.

He said once it started raining, he stopped at an underpass and moved the dog to the cab of the truck. He said the dog wasn’t out in the rain for long.

According to Heidelberg, his dogs are “show dogs” and he wouldn’t treat them badly.

A decal on the truck’s rear window advertised a local Bulldog breeder, Bubs Indiana Bulldogs. Demo posted the photo to their Facebook page, urging people not to buy from a breeder that would treat their dogs so badly.