UPDATE August 29, 2012: It makes me really sad to report that Hattie got seriously ill and has ran up an emergency vet bill of over $3,500.  The good news is that Hattie is now home, recovering and already back to work alerting Jen to sounds. Hattie’s health diagnosis will require much needed future maintenance and care in order to allow her to continue to do her sound work duties for Jennifer.  Jennifer and Dogs for the Deaf could use  your help with Hattie’s medical expenses.  If each reader of Dogington Post could donate $1.oo each, Hattie’s vet bill would be taken care of in a matter of days. Learn where to send your $1.oo donation here.

UPDATE August 7, 2012:   The legislation passed and the Governor of Pennsylvania is signing it into law at a ceremony tomorrow, August 8, 2012. We received this notification from Jennifer and Hattie.

At this event, Governor Tom Corbett will be publicly signing H.B. 165, also known as “The Service Dog Bill.”

The bill allows for dog owners to be charged with a third-degree misdemeanor if their dog attacks a service dog and they had knowledge of the animal’s aggression, or if the animal had a history of attack.

Individuals found responsible for a service dog’s harm would be responsible for veterinary bills, replacement and training costs of a new service dog, fines, and more.  The passing of this bill recognizes the importance of service dogs and the extensive training that goes into a service dog to enable it to serve a person with disabilities.  Governor Corbett will be joined by others who were instrumental in passing H.B. 165.

Susquehanna Service Dogs (SSD) is honored to be a part of this event, and we hope you will join us there!
Wednesday, August 8th
10:00am promptly
SSD’s “Puppy Palace” in the Harrisburg Mall (upstairs, next to Game Stop
3501 Paxton Street, Harrisburg, PA  17111

Way to go Hattie and Jennifer! We hope PA is just the first to pass such an important law for our service dogs and hope the rest of the states follow.

UPDATE May 22,2012: As you read the story below you’ll see a reference to pending legislation in Pennsylvania that pertains to the rights and protection of Service/Assistance Animals and their users. Here’s an update on that legislation, directly from Hattie’s “mom” Jennifer:

“As of today, House Bill 165 (fondly known as “Hattie’s Bill) passed the Pennsylvania Senate with criminal penalties intact; as well as, our Civil Liability Amendment included. For FOUR VERY LONG YEARS, Hattie and I have been waiting for this moment! What a victory today has been for those in Pennsylvania that use Service and Assistance Animals in their daily lives.”

There’s an old saying that “everything happens for a reason.”Yet when I hear about animals not being cared for I simply cannot foreshadow any good reason for that happening. Often we don’t get to know the end of the story. This, however, is the end of such a story.

Meet Hattie. Malnourished with a dull, lackluster coat and vacant eyes, Hattie began life in California. By the age of about 8-12 months old she had already done two stints in the local dog shelter, both as the result of running away from homes that didn’t care for her. But the people working at the shelter saw something in Hattie and called Dogs for the Deaf to see if they’d be interesting in evaluating Hattie for one of their programs.

You see, Dogs for the Deaf gets all of their dogs from shelters. Trainers evaluate shelter dogs, looking for the characteristics that make a good service dog. Some of the initial things they look for are attentiveness, willingness to make eye contact with a human and an expressed desire to receive affection and attention. Hattie had all that – and more.

Thus began Hattie’s new life – the life she was meant to live. Hattie was taken to the Dogs for the Deaf facilities located in Central Point, Oregon where she underwent a health evaluation, hearing test and appropriate diet, grooming and exercise to regain her health. Once healthy, Hattie was spayed, micro-chipped, vaccinated and then began a training regimen that would last about six months.

Across the country, in Pennsylvania, was Jennifer. A 29-year-old, independent woman who had lost her hearing at the age of 10 as a result of Ménière’s disease; an inner ear condition afflicting less than ¼-of-1% of people.

“When I moved into my first apartment, I had signaling devices that flashed lights to alert me to the different sounds in my home, such as the telephone, the doorbell and the smoke detector. Unfortunately the system had many limitations; if I stepped out of the room I would miss the signal, the system didn’t recognize all sounds in my home and the worst part was that the signaling device ran on electricity so if the power was out, it didn’t work,”Jennifer recounts.

“I would lay awake at night frozen in fear, unable to fall asleep because I may not notice the smoke detector alerting me to a fire,” remembers Jennifer. “I discovered that the device could also be set off by other remote signaling devices, such as the neighbor’s garage door opener. So there were many times I would be signaled that someone was at my door, only to discover nobody was actually there. Life was frustrating, scary and exhausting.”

Jennifer finally decided she needed a more reliable means of help when her mother stopped by her apartment on bitterly cold winter day and it took 20 minutes for her mom to get Jennifer’s attention that she was at her doorstep. “That is how I found Dogs for the Deaf,” says Jennifer.

September 2006. Jennifer sent her initial application request to Dogs for the Deaf for a hearing dog. The next four months were spent in an application process, a screening process and an interview process. And in January 2007, Jennifer was notified that she had been accepted, and was placed on the waiting list for a hearing dog.

The hearing dog that Jennifer would get six months later was none other than Hattie – our runaway from California.

Hattie’s trainer and Hattie flew from Oregon to Pennsylvania for one final week of training. This time the training was with both Jennifer and Hattie, in Jennifer’s home.

Since that week six years ago Hattie has been Jennifer’s ears. “One of the most special moments that sticks out in my mind,” says Jennifer, “was when I was able to order food and have it delivered to my home for the first time. Before Hattie, I was unable to do this because I never knew when the delivery man would arrive. If I would call for food delivery, I would have to stand at the door for the 20-30 minutes they told me it would take, which was frustrating and depressing, to say the least. Hattie and I were only a team for a week, when I had my first food delivery and I must say, that was the MOST DELICIOUS Pizza I had ever eaten!”

“I could sleep a peaceful night’s sleep because I knew Hattie would alert me to the smoke detector. Hattie not only transformed MY LIFE but her training had a ripple effect. My family no longer worried about me living alone as a single deaf woman. They too, could sleep a peaceful night sleep, knowing Hattie is there to alert me to sounds like the smoke detector. They were able to witness the transformation in me. I was becoming a happy and independent woman.” 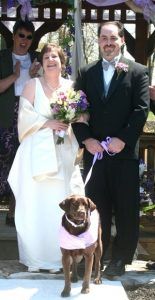 “She (Hattie) is my life, my soul and is far more to me than “my ears”-I met a wonderful man and got married on April 30, 2011. Hattie was a part of our wedding. She walked down the aisle and gave me away, along with my father. Hattie also stood with us during the ceremony, my husband and I would not have our wedding day without Hattie. He knows what she means to me, what she does for me on a daily basis and we both agreed our day would not be complete without Hattie with us.”

You might think Hattie’s story ends there, but it doesn’t. Hattie has helped a little girl in the park, inspired school students to create a group called “Hattie’s Helpers” to collect supplies and money for Dogs for the Deaf and even serves as the icon and namesake of pending legislation in the PA Legislature, called HB 165, that pertains to the rights and protection of Service/Assistance Animals and their users under PA Law. It is fondly known as “Hattie’s Bill” and is the first of its kind for Pennsylvania. It has successfully passed the House Judiciary Committee, complete House Floor and the PA Senate Judiciary Committee and it is currently in the PA Senate awaiting a floor vote. (Here is a link to “Hattie’s Bill“)

These are the reasons Hattie ran away from her first two owners. This is the home Hattie was meant to have. This is what Hattie was meant to do with her life. For all of this, Hattie is a nominee in the 2012 American Humane Association’s Hero Dog Awards. Vote for her here.

Learn more about Dogs for the Deaf here.