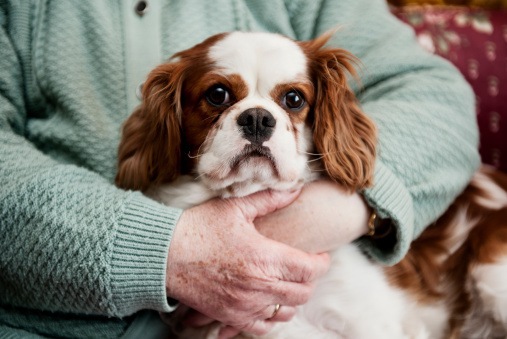 Researchers at Newcastle University have hypothesized that a dog’s mood and behavior could be an indicator of their owner’s health.

The project began when researchers developed a tracking system to monitor dogs’ activity. Using special sensors, the team can remotely monitor a dog’s entire day, from how often he sleeps, to when he sits, barks, eats, digs, plays, and more with a special waterproof collar with a built-in accelerometer designed to monitor 17 distinct dog behaviors.

According to an article in the Science Blog,

By mapping the normal behavior of a healthy, happy dog, Dr Cas Ladha, PhD student Nils Hammerla and undergraduate Emma Hughes were able to set a benchmark against which the animals could be remotely monitored. This allowed for any changes in behavior which might be an indication of illness or boredom to be quickly spotted.

The next step in their research, project lead Ladha, says, is using the dog’s behavior and activity as an indicator, or early warning system, of an elderly owner’s health and well-being.

The team is dedicated to researching and developing systems for helping the elderly live longer, healthier lives. They believe this new method of monitoring their dogs would allow family and caregivers to “discretely support people without the need for cameras,” and without invading their privacy.

The team believes that eventually the elderly will be able to outfit their dogs with the special collar, allowing their behavior to be monitored, to quickly identify changes in either the dog’s health, or the owner’s.

Does your dog behave different when you’re not feeling well, stressed, or down in the dumps? Weigh in with a comment below!

About the project, Hammerla added, “A dog’s physical and emotional dependence on their owner means that their wellbeing is likely reflect that of their owner and any changes such as the dog being walked less often, perhaps not being fed regularly, or simply demonstrating ‘unhappy’ behaviour could be an early indicator for families that an older relative needs help.”