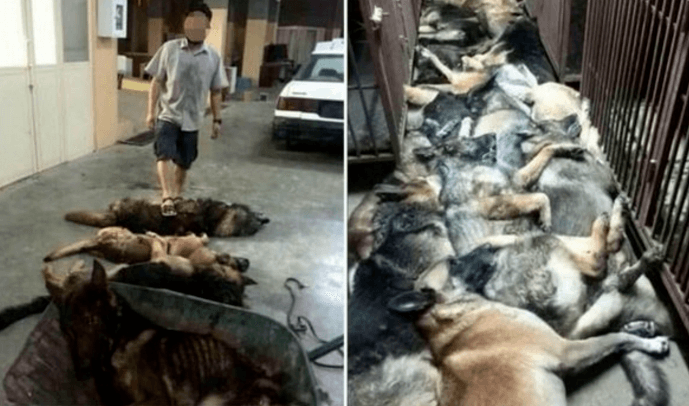 An American securities company operating in Kuwait is under investigation after photos leaked to social media, along with allegations of a “revenge killing,” showing dozens of German Shepherd and Belgian Malinois dogs, dead and piled up like trash along a corridor of rusty cages.

When KNPC canceled the contract, Eastern Securities were left with more than 140 highly trained military working dogs that no longer had a job and, instead of earning approximately $9,000 per month, per dog, were costing the securities company money to feed and house them. Instead of finding homes for the dogs, Eastern Securities chose to euthanize at least 24-40 of them at once.

Rumors and allegations that the dogs were killed as revenge over the lost contract and unpaid employee wages quickly spread. Kuwaiti lawyer Esmail Al Misri lodged a formal complaint with local authorities calling for a criminal investigation into the dogs’ deaths.

While it is unknown how the dogs were killed, or what will happen to the remaining 100 dogs in their care, Eastern Securities maintains that the dogs were all humanely euthanized due to either aggression that made them unsuitable for adoption or due to health issues.

According to the Arab Times, an employee with the securities company has dismissed claims that the dogs were killed out of revenge because of the lost contract and failure to pay workers their wages. The person, who provided information anonymously, declared that “falsehoods were being spread online.” The individual claims that the dogs who are seen in the photos were actually humanely euthanized because of various medical conditions. He further explained that all the dogs that were selected to be killed were old and retired from service “on account of medical conditions” that included tumors, cataracts, chronic diarrhea and hip dysplasia while others were too aggressive to be rehomed.

Other former employees of the security company have since come forward and alleged that the company refused to pay out of pocket to care for the dogs or provide needed veterinarian care. One employee said the dogs suffered from stress, skin lesions, infections, eye and ear disorders, stomach issues, growths and lacked exercise and sunlight.

The insider told the Arab Times, “The company had taken steps to euthanize small groups of dogs over a period of time but a member of our kennel staff jumped the gun and euthanized them all at once. He has been terminated for going against the procedure.”

Eastern Securities says there are no plans to euthanize the additional dogs in their care.