A former stray dog went from living on the streets to living among the monks as the newest member of the Franciscan monastery of Cochabamba, Bolivia. 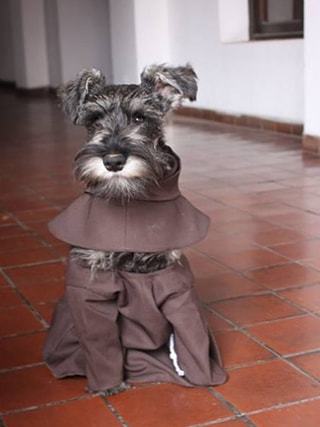 In photos posted to Facebook by Kasper Maruisz Kapron Ofm, the handsome pup is pictured with Freddy Albarez and Jorge Fernandez, who couldn’t be happier alongside their newest furry friend and fellow friar.

The dog, a rescued Schnauzer named Carmelo, even got his own tiny habit to wear on monastery grounds and an official title, Friar Bigotón (bigotón is Spanish for “mustache”).

Looks like Carmelo is just as happy with his new living arrangements as his friar friends!

“His life is all about playing and running,” Jorge Fernandez told The Dodo. “Here, all of the brothers love him very much. He is a creature of God.”

While preaching to the fish and bringing smiles to everyone at the monastery keep Friar Bigotón quite busy, his adopters had a bigger idea in mind when they adopted him – to inspire others to do the same! 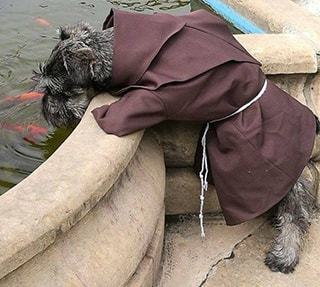 “If only all the churches of our country adopt a dog and care for him like Friar Bigotón,” the group wrote in a post on Facebook, “we are sure that the parishioners would follow his example.”