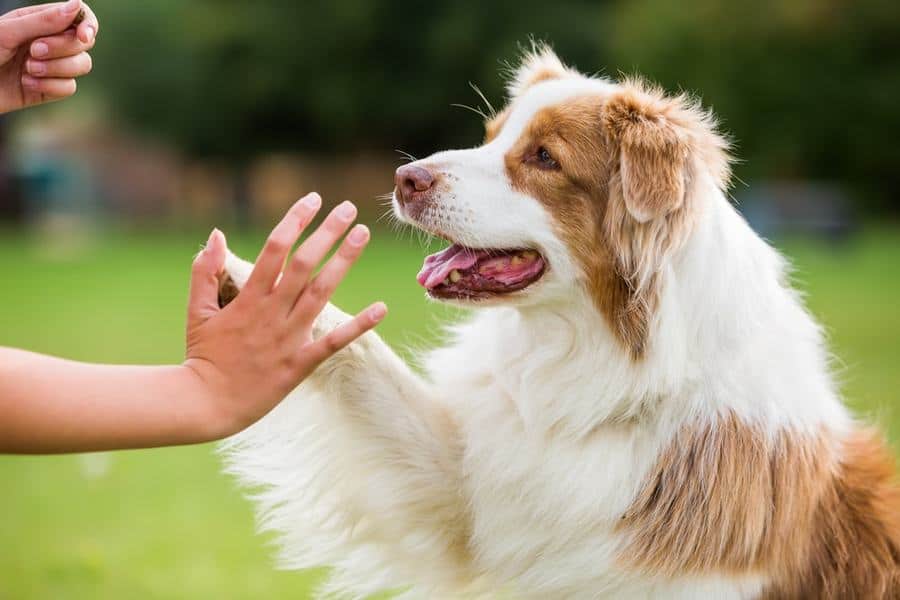 One of the best ways to have a great relationship with your dog is to make sure they are well trained.  And training your dog can seem a little overwhelming sometimes but I have an entire series of super short videos that you can check out for training tips.  Then, when you’re feeling confident that you have some of the basic commands, like sit, stay and come mastered, it’s a good idea to continue to teach new behaviors so that your dog is in the habit of learning new commands.

Plus, it can be fun to teach them tricks and show off to your family and friends.  I mean, who doesn’t like to show off what their pup can do?  You will be amazed how enthusiastic your friends will be to “get a paw”

Below I have set out some simple steps for teaching your dog to shake, high five and crawl.  All of these are easy to teach as long as you are patient and don’t forget to use positive reinforcement!

Don’t feel like you have to train the entire trick in one session.  Remember to be patient, stay positive and always end on a good note.

Teaching the high-five is very similar to the shake but you are simply turning your hand over.  Again, be sure to start by teaching your dog the behavior before introducing the verbal command.  Follow these steps:

If something more exciting happens that attracts your dog’s attention, be sure to pull out your more exciting treats. Keep in mind that progress is what matters and that you don’t have to accomplish mastering the entire trick in one session.  Always end each teaching session on a positive note.

When training your dog, one of the most important things you want to remember is that you never want to physically try to manipulate your dog.  For instance, when it comes to training your dog to crawl, one of the things that doesn’t help is pushing down on your dog’s back.  There’s no need to do that if we are training your pup correctly.

Here’s how to properly teach the behavior:

When training your dog new things, I can’t emphasize enough how important it is to stay patient and positive. Upbeat voice, happy belly scratches, and other things like this make them feel positively reinforced. Remember, rewarding your dog quickly for any progress he makes and always ending the session on a good note are essential.  The more your dog associates you with positive rewards and fun, the more your furry friend will respond to learning new behaviors. 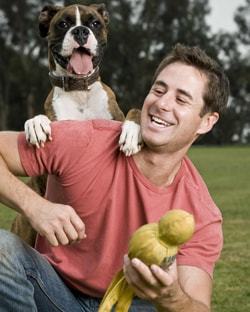 Travis Brorsen is one of the most sought after dog trainers in America today. Travis is Founder and CEO of Greatest American Dog Trainers, and is Animal Planet’s pet expert and trainer, hosting their new show, MY FAT PET, which premiers in Fall 2017.

Travis and his team of trainers at Greatest American Dog Trainers not only provides hands-on training and dog walking to their canine clients and their humans, but are also focused on helping pets become more holistically healthy, fit and happy.

Growing up on a farm in Oklahoma, Travis has been around animals large and small his entire life. However, choosing to pursue a career in entertainment rather than agriculture, he moved to Los Angeles after college where he appeared in more than 20 national commercials and guest starred in several hit shows such as Desperate Housewives, JAG, Bones, Drop Dead Diva and many others.

In 2008, Travis and his 14-month old, highly energetic and untrained boxer, Presley, were selected as contestants for CBS’ national dog training competition, Greatest American Dog. While producers (and Vegas) gave the duo little chance of advancing past the first week, Travis and Presley pushed themselves to their limits and after 12 weeks of grueling competition, beat the odds and won the entire competition.

As a result of the show, Travis discovered he had a passion to help other dogs and their owners create similar positive learning and relationship building experiences and spent the next five years building a highly successful dog training business in Los Angeles. After moving to New York City in 2012 to marry his sweetheart Heather, he founded Greatest American Dog Trainers and can currently can be spotted in Manhattan working intently with a Park Avenue pooch.

Travis was nominated for TV’s Best Dynamic Duo for the Fox Reality Awards, and is a frequent guest on many TV and Radio shows such as Fox and Friends, Animal Planet’s Faithful Friends, National Geographic’s Brain Games, E! and others. He has contributed to many magazines and websites such as Good Housekeeping, Life and Dog Magazine, Boxers Magazine, Star and Hollywood Life. He was also featured in Top Dogs and Their Pets, a book published to raise money for the Cesar and Ilusion Millan Foundation.