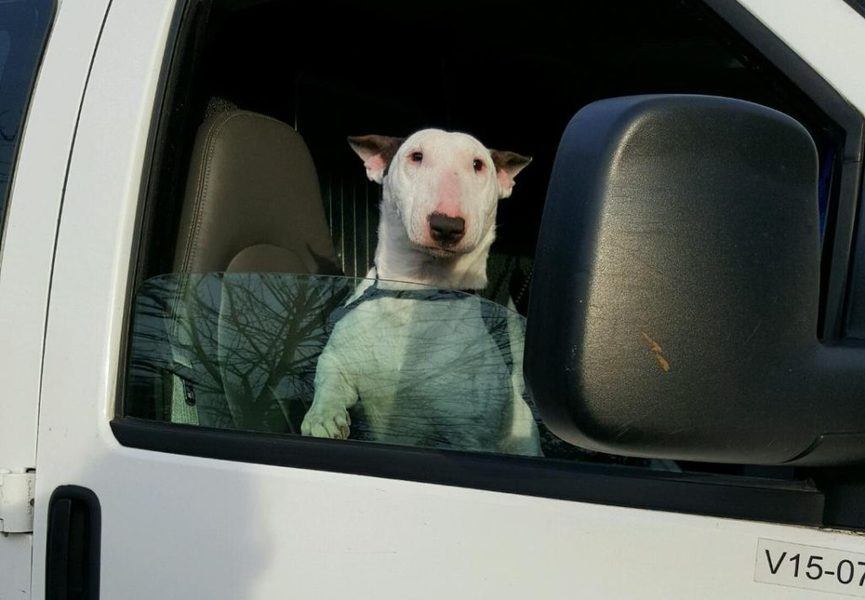 A Vancouver, Washington pup landed herself in ‘doggie detention’ after sneaking onto a school bus and taking a joyride to the local middle school!

On Wednesday morning, AnnDee Vorrayo let 1-year old Amaya, a Bull Terrier, outside into her fenced backyard without realizing that a gust of wind had blown open the gate. About 45-minutes passed before the Vorrayo’s realized their pup was missing.

Little did they know, Amaya was living it up on a local school bus, surrounded by middle-schoolers that were, no doubt, thrilled to have a four-legged friend on board.

Evergreen Public Schools bus driver, Susanne Heyman was on her normal morning route when she noticed a dog run into the street and under the bus. When she stopped the bus and opened the door, Amaya quickly darted on board to join the kids.

Rather than leave the dog running in the street, Heymann continued on her route to the school. She radioed school officials to let them know there was a dog on board and to be prepared when they arrived.

It was only a four-minute ride, but Amaya enjoyed every minute, Heyman told The Columbian.

“She sat on a seat, facing forward, and put her paws on the seat in front of her and was riding like, ‘This is where I belong,’” Heyman said. “She was barking and making a lot of noise. She was so happy.”

When they arrived at Shahala Middle School, a custodian retrieved Amaya from the bus, but she quickly wriggled free and gleefully darted around school grounds until he was able to corner her in a bathroom.

Clark County Animal Control Officer Trish Kraff arrived at the school to pick up the dog, who wasn’t wearing a collar and wasn’t microchipped, to the Humane Society for Southwest Washington for doggie detention. It was real life ‘Mary Had a Little Lamb’ episode, she laughed.

Shortly after her ordeal, Amaya’s owners called Clark County Animal Control to report their dog missing – that’s when they learned of her adventures that morning.

“I couldn’t believe it,” Vorrayo said. Then, she added, “She loves kids, so it does not surprise me that she would do it.” Amaya’s family, happy to have found her, picked up their adventurous pooch at the Humane Society, had her microchipped right on the spot, and planned to head straight home to fix the gate through which she’d escaped.