When a California woman’s dog went missing from her home, she searched for hours, frantically, to find him. Then, she got the phone call that no pet parent wants to receive. The Bichon/Maltese had been intentionally thrown into traffic and killed. 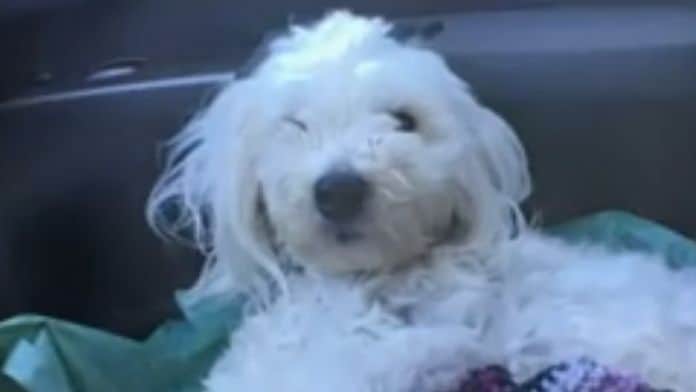 Deb Ferrara returned from a friend’s funeral on Thursday, when she discovered her 18-month old Bichon/Maltese puppy, Rex, was missing from her Vacaville, California home.

After exhaustively searching for several hours, she got the devastating phone call. Rex had been found, but it was too late. He’d been struck by a car and killed on California’s I-80 interstate.

Most disturbingly, the puppy’s legs had been bound together with plastic and he’d been intentionally thrown into the busy highway.

Monica Andersen and her fiancé, Erik Gow, found Rex. The couple were driving on the I-80 when they saw Rex get thrown from a vehicle.

“All we saw was this white thing come flying out of a blue [Toyota] Prius,” Anderson told Fox40. Andersen stopped and tried to get to Rex, but he was struck by a car and killed before she could reach him.

She called the phone number on Rex’s ID tag and delivered the horrific news.

“One of the things I thought of right away was how scared was he, how frightened was he especially when this guy is tying him up and throwing him out of the window,” Ferrara told KCRA. “It’s such a cruel way to end a little dog’s life.”

Anyone with information about Rex’s death should contact Officer Josue Cuevas at 707-449-5200 and reference Vacaville PD case number 18-01071.

A reward fund has been set up by Paws 4 Paws Rescue Mission to help find those responsible for Rex’s death. As of Tuesday morning they have collected $3030.