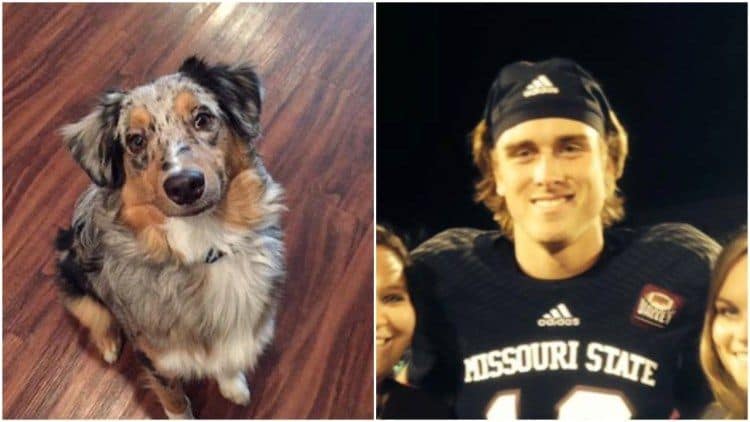 Ruddick is accused of attacking his friend’s dog, a 42-pound Australian shepherd named Luca whom he was supposed to be dogsitting.

“Earlier this week one of my close friends left her adorable sweet loving dog with Breck Ruddick. This was someone she trusted, this was a guy who has watched her dog before and who she has spent a good amount of time with as friends. She never thought leaving her 42 pound Australian Shepherd with Breck, a 200+ pound MSU football player, would lead to this. Never once did she, nor anyone else for that matter, believe that Breck could get so upset with this sweet dog that he would hit him in the jaw, not just once but three times. After “losing his cool” and hitting poor Luca he led him outside and let him run off, all alone and bleeding profusely. Breck told Katie that “Luca had ran off” leaving out the part about him beating the crap out of Luca.

She spent the whole night looking for her dog. The next day a girl saw Katie’s post on Facebook and explained that she had found Luca in a parking lot covered in blood. The girl was nice enough to take him home and attempted to clean him up. When he was returned to Katie, the next day, he was STILL bleeding. He was then rushed over to the vet where they found that his jaw had been broken and he would need surgery.

The next day Luca went in for surgery where it was found that his jaw bones were shattered (not just broken), he had to have 6 teeth pulled, which will be permanently gone forever and they had to keep him at the vets for two days instead of one.

He can no longer eat solid food and will have to be on an oatmeal based diet. That’s when the vet explained to Katie that Luca had to have been hit more than once, with literally all of Breck’s force or with some other object, because the trauma was so extensive it could not have been from one single punch.”

Breck responded on Facebook, saying, “The story that’s getting told is way out of proportion. I didn’t break the dogs the jaw nor did I let him run away. I was dog sitting him and he was on my bed, I wanted him off the bed so I gave him like a tap to try and get him off but he didn’t move so I gave him a little push and he bit my hand not extremely hard but enough to shock me. I’ve apologised to her and paid all the bills because I felt so bad. I don’t hurt animals that’s not who I am. If you don’t believe about what happened to the dog I have proof of the bill that I didn’t break its jaw.”

Police and Missouri State’s Office of Student Conduct are investigating the allegations.

On Monday, Springfield Animal Control issued Ruddick two tickets – one for animal cruelty, one for allowing a dog to run at large. Both are municipal ordinance violations. As the investigation continues, additional charges may be filed.

A petition to permanently remove Ruddick from the football team has already gotten more than 30,000 signatures.