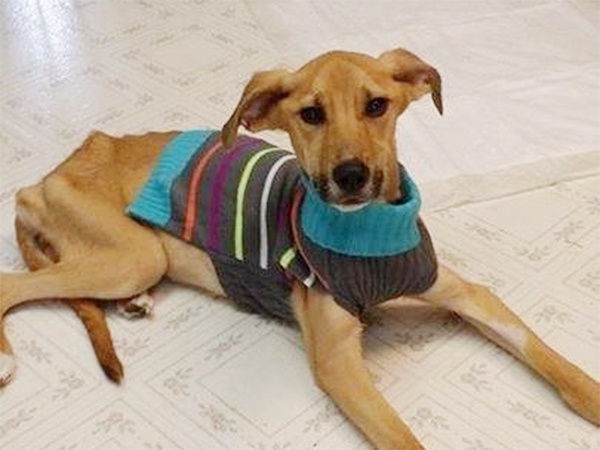 A Somerset County, Pennsylvania sanitation worker literally uncovered a horrific case of animal abuse on Thursday. When Nathan Binnis lifted the lid off of a garbage can along the side of a road to dump it into the sanitation truck, he noticed one of the bags was moving.

What he found inside would shock him. Looking up from inside the can was a starved, emaciated dog. Binnis took the dog out of the garbage can, fed her his lunch, and called the Humane Society.

The dog was extremely malnourished, weighing only 17 pounds though her healthy weight should have been about 50. The Humane Society guesses that she spent at least 4 days – possibly 6 – trapped inside the garbage can. 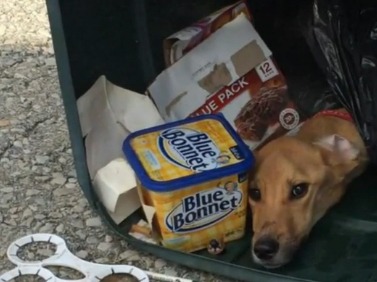 Fortunately for rescuers, the dog was microchipped. She was discovered to be a 5-year old hound-mix, registered to Nicole Baker, a woman who lived in the home right where the garbage can, and the dog, were found. Nicole had just moved from Pennsylvania to Texas, and apparently left her sweet dog behind with the garbage.

Veterinarians say the dog was found in the late stages of starvation and, had Binnis not found her, would not likely have survived another 2 days.

Nicole Baker and her neighbor Brittney Booker, a secondary registrant on the microchip, are not yet charged with animal cruelty, but are being investigated. In one report, Baker is claiming her dog ran away before she moved.

For more information and photos – visit the shelter’s Facebook page.