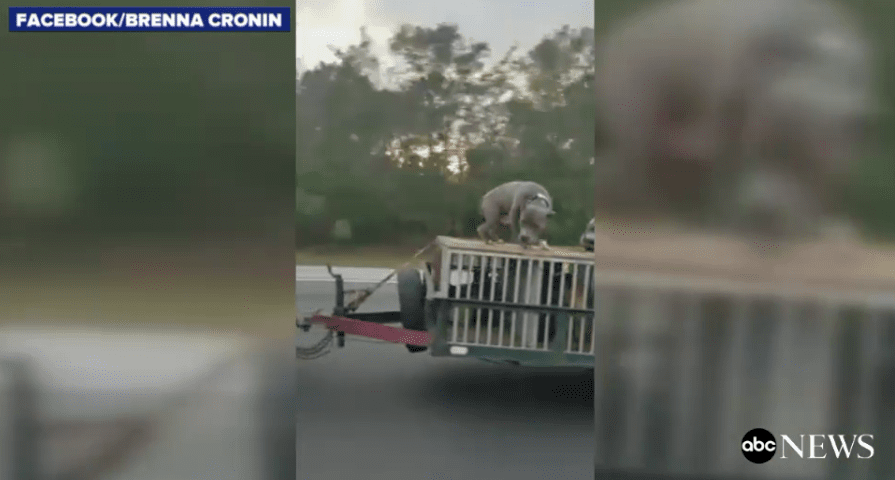 Authorities launched an investigation after a video was posted to Facebook of a dog chained to the top of a crate being towed by an SUV traveling at least 70 mph on a Florida interstate.

Palm Coast, Florida resident, Brenna Cronin recorded the video as she and her boyfriend were driving southbound on I-95 toward Daytona Beach. In the video, a dog is seen standing on top of a crate, which contained at least one other animal, while a Chevrolet Tahoe pulled the trailer at high speeds.

WARNING: This video contains language that be be offensive to some viewers.

The dog seen in the video is an American Pitbull Terrier named Zeus, who, according to his owner who did not want to be identified, does not like to ride inside the crate.

As shocking as the video is, traveling with a dog in this manner isn’t entirely illegal. A county ordinance allows people to travel with a dog in a truck bed or trailer as long as the animal is either in a crate or pen, or is tethered twice to the vehicle.  (No. 93-15 S 4, 11-15-93 of the Flagler County Code of Ordinances).

Because Zeus’ owner only used one chain to tether the dog, he received a citation for improperly transporting an animal. The citation carries a $35 penalty.

Authorities performed a wellness check on the dog and found him, along with several other dogs owned by the same family, and found the animals to be both well cared for and not involved in any illegal activity.

Animal cruelty charges are highly unlikely but are possible if the owner is found to have had criminal intent to harm the dog. The dog remains in his owner’s custody.