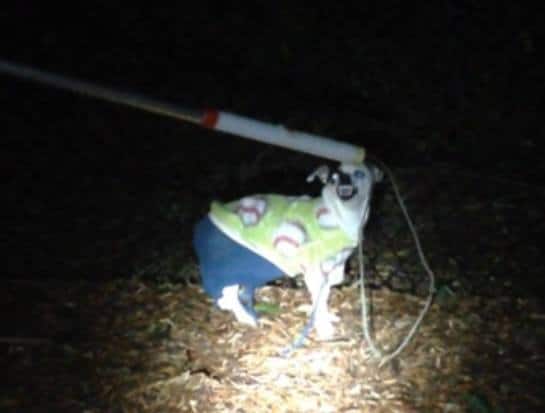 Police in Bellevue, Washington are seeking the public’s help in identifying the owners of a dog found alone in a park, dressed in blue pants and a sweater, and very unhappy to be caught.

“Is this your dog?” the police department’s Facebook post reads. “He was found by one of our officers in Robinswood Park with no tags or ID. And yes, he was wearing a sweater and blue pants, and was very angry.”

News of the unusual post traveled to other police departments around the country quickly. “Of course he’s angry,” responded the Johnson County Sheriff’s Office in Kansas. “That sweater doesn’t match those pants at all!”

As silly as this story is, the truth is that there’s a confused little dog wondering where his family is, that may lose them forever if they don’t find him.

Anyone with information about the dog or the owners is urged to contact Bellevue Police or the Alpine Animal Hospital in Issaquah where he is being temporarily cared for. If no owner steps forward, he’ll be placed for adoption (minus the pants).