A North Florida family is devastated after police responding to a false alarm shot and killed their beloved dog, Lola in her own backyard. 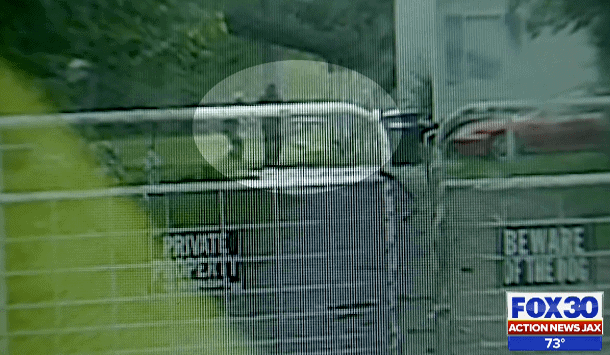 Two Nassau County Sheriff’s deputies visited the home of Jennifer Sheerin and Howard Muhs after a neighbor called police to report that she thought she’d heard a burglar there.

Dash-cam video shows the deputies drawing their guns as they opened the gate, passing clearly posted “Beware of Dog” signs, and entered the property.

When they reached the corner of the home and started toward the backyard, Lola ran toward them. That’s when Deputy David Lewis fired three times at the dog.

One of those shots struck Lola, killing her.

“If the dog is aggressive and coming toward the officer and the officer feels like his life is in danger, then certainly, he or she needs to take appropriate action and sometimes that is to shoot the dog,” he explained.

Lola’s family isn’t convinced their beloved dog was a threat.

“She was probably coming out to lick him, to be honest with you. She’s never bit anybody,” Muhs said.

The family also suspect Deputy Lewis acted on impulse, having just been bitten by another dog the day before shooting Lola. They also question why their dog was killed instead of stopped with non-lethal force.

“He shot to kill. He didn’t give her a chance. I could’ve taken her to the vet if he’d have shot her elsewhere, or maced her, or stunned her,” said Sheerin.

When asked how other dog owners can prevent this happening to their own dogs, Sheriff Leeper said, “keep control of your animals. Keep them on a leash. Keep them locked up to prevent them from biting someone else. Because they can kill another person.”

He did not address the fact that police entered the family’s fenced property, where Lola, a dog with no history of aggression or biting, was safely contained.

Approximately every 98-minutes in this country, a family dog is shot by police leading some industry officials to refer to the shootings as “epidemic.” To learn more about how to protect your dog and how police departments around the nation are combating the issue, click here.