A reporter broadcasting during Hurricane Florence interrupted her own livestream in order to help rescue a dog from drowning in the rising floodwaters. 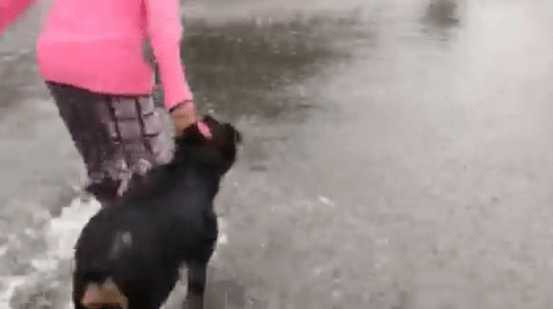 Julie Wilson, a reporter for ABC station WTVD, was livestreaming from a New Bern, North Carolina neighborhood filled with knee-deep water as rain continued to pour around her and waters continued to rise.

About a minute-and-a-half into the livestream, she met a woman whose dog was trapped inside her home.

When Wilson asked the woman, named Tasha, if it was safe to go back for Daisy, a therapy dog for her daughter, Tasha simply answered, “I have no choice.”

Wilson followed Tasha back to the house and, when the dog owner was too tired to carry the large Rottweiler by herself, Wilson picked up the pup and carried her to safety.

Tasha’s son, who was celebrating his 17th birthday, went inside to rescue the family’s second dog.

“Nobody’s leaving the dog in this mess,” Wilson said. “That’s what we’re doing out here.”

Wilson also gave a bit of important advice for anyone in the path of a devastating storm. “When they tell you to leave, leave.”