Most of the 70,000 or more dogs that are bred and sold into research are put to death after the laboratory’s experiments are over.

Bogart – known for most of his life only as Number 5989418 – is one of the lucky beagles saved by the Beagle Freedom Project, a rescue that focuses on saving Beagles from certain death after they are used for research. Kelle Selcer told us the heartwarming (and heartbreaking) story of how Bogart came to be a loved part of her family:

Once the decision was made to adopt Bogart, and bring him into our lives, we never looked back.  My husband and I already had a Beagle, Jack, who I had since he was a baby and  was now 10 years old.  Though Bogart was not quite 4 years old when we adopted him, we had to remember that his lack of exposure to the real world made him more like a puppy, and that we would have to be patient with him.  He had lived his entire life inside a cage as a research subject, and had no idea what being a dog meant.  If a research lab is willing to cooperate with organizations, such as The Beagle Freedom Project, who was responsible for rescuing Bogart, they essentially hand over the animals and walk away.  They don’t provide any information whatsoever about what these dogs have been subjected too, nor the true state of their health.  So, when adopting a dog that has been a research subject, one is faced with mostly unanswered questions that may or may not be solved down the road. 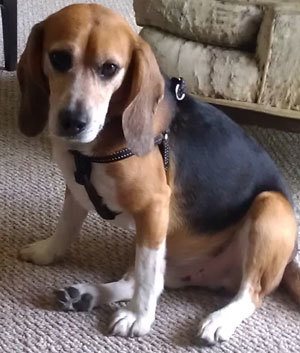 Bogart was one of 10 male beagles, rescued from a research facility in San Diego.  The Beagle Freedom Project, dedicated to rescuing lab Beagles and offering them a chance at freedom, is an incredible organization that treats each rescued dog with individual care. Each dog gets full medical examinations, vaccinations and whatever medical attention each requires. Several of Bogart’s lab mates were visibly not healthy.  Some had fresh scars, most had poor dental hygiene, and some were very sick.  Yet, to my surprise, most of these dogs were loving and affectionate, something that would continue to baffle me to this day.  These dogs lived in cages, they didn’t have names, they weren’t loved, and many likely mistreated. Yet, removed from the only environment they had even known, and given a chance at happiness most flourished…as did Bogart.

We were told Bogart was very shy when he first arrived at BFP.  Yet, Bogart was the first dog to greet me, gently jumping up on me with his two front paws, when we first arrived to meet the group.  He was very easy to fall in love with, he was handsome and polite and was already being referred to as a “gentleman”.  All of the beagles were adorable, and affectionate in their own way, but I knew Bogart was special, and if we didn’t commit to take him, someone else would.  Thankfully BFP adheres to a strict adoption process, so I knew that each of those Beagles was going to end up in a loving patient home, filled with the affection and happiness that they deserved and had been deprived of for so long.

We arrived home with Bogart, and decided the housetraining would begin right away. Beagles living in cages their whole lives do not know what “pee pee outside” means. They also don’t know what a collar and a leash is for, so overcoming that hurdle had been the first order of business.  We had spent some time helping at BFP with Bogart and the other rescues before Bogart came home with us, and had spent time attempting to walk each dog. Some had picked up the whole concept of walking on a leash faster than others, as did Bogart, but mostly it began with each dog sitting or laying on the sidewalk staring up at us with the leash in our hands, not budging.  Thankfully, Bogart was used to the leash by the time we got home, however going to the bathroom outside on a walk had not yet been conquered.  We thought Bogart would pick up on his new brother Jack’s routine, and follow in his footsteps by taking care of business on the walks.  However, it would be weeks before Bogart got used to the whole idea, and we now had to budget a lot of extra time each time he went out. 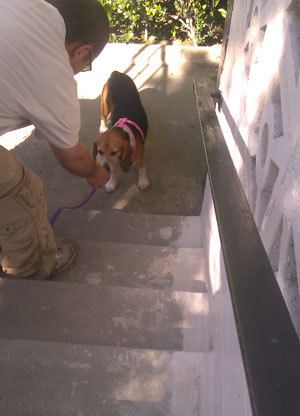 Bogart was terrified of stairs, having never encountered them in his life at the research lab.

Another surprise we hadn’t anticipated upon our arrival home, Bogart completely froze at the bottom of the flight of stairs that leads to our front door.   As though he were paralyzed, he refused ascend the stairs.  Then we realized, of course, he didn’t even know what stairs were, he’d never seen them, let alone climb them.  One step at a time, and 20 minutes later he made it to the front door.  Going down was easier, though it took a little time.  We realized how eager to please Bogart was, when he zoomed up the stairs on his second attempt.  We learned later that it usually takes these lab pups weeks to get used to stairs.  Our new sweet adorable dog was also showing signs that he would be easy to train.

For the first couple of weeks of Bogar’ts arrival, we would watch him discovering all sorts of new objects, much as a puppy would.  Dog toys would remain untouched until much later, when he would become more confident.  But shoes were intriguing to him, he would nose them out of the closet one by one and into another room, probably amazed at his own accomplishment and freedom.  Flowers, rocks, trees and objects on the sidewalk were all new to Bogie, and we would watch as his ears would perk in curiosity, while he determined whether the object was friend or foe.  Often times, he would walk as far around a crumpled up leaf as he could to avoid it, as he obviously deemed it unsavory.  On occasion, he would  freeze on a walk for no apparent reason, refusing to continue.  He’d just stop, and not budge, looking fearful, until the moment passed and then continue walking as though nothing  happened.  This is one of his unexplainable behavioral nuances that still happens from time to time.

Bogart is a very mellow, easy going guy.  Adjustment to his newfound freedom and life inside a house has come fairly quickly and easily overall.  But he is the exception, and not the rule.  One of Bogart’s lab mates that we met at BFP, was clearly an abused and distrusting dog.  He was the only one of the 10 dogs that cowered in his bed when people were around. I was lucky enough to catch him once, I just wanted to hold him in my arms and caress him and introduce him to affection and assure him life was going to get a whole lot better. But he laid stiff as a board in my arms, eagerly waiting for me to put him back on the ground so he could run as far away from me as possible.  This is very typical behavior, as many lab animals are mistreated.  But placed in the right home, and given a lot of patience and love these animals eventually learn to trust again. 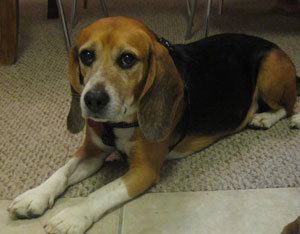 We are madly in love with our Bogart, and we feel very lucky to have him in our family.  And while we also feel very lucky that he adjusted to his new life easily, we know that there may be some mysteries that will uncover themselves in his future.  One of Bogart’s lab mates, was adopted by a wonderful couple who took their boy in for an xray, only to learn that he has wires running internally throughout his body, likely for some type of medical device testing or perhaps a contraption to monitor his organs for a study.  It’s unsettling news, but thankfully the dog can live a healthy life in spite of his hardware.  But you never know what you’re getting with these animals.

For now, Bogart is a healthy and very happy boy.  He showers us with love and affection, and demands it in return.  We happily and enthusiastically oblige, wishing only to make up for all the time he went without his only true desire, love.