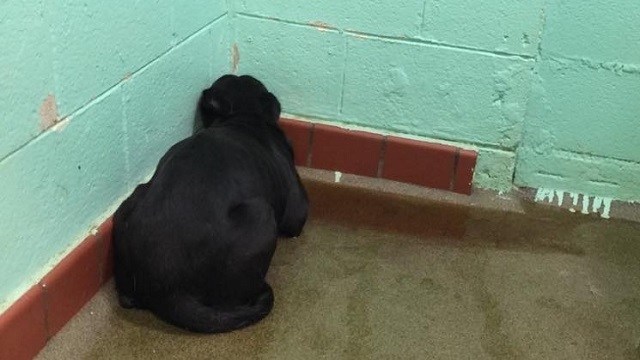 Via The Haley Graves Foundation/Facebook

The now-viral image of a shelter dog, huddled in fear in the farthest corner of an old kennel, face planted firmly into the wall, in a puddle of his own urine is tugging at the hearts of animal lovers everywhere.

The Black Lab, believed to be named Cash, was surrendered to a county shelter about 24-hours before the photo was taken by Tammy Graves, founder of The Haley Graves Foundation in North Carolina. Tammy was visiting the shelter to photograph three dogs for a Lab Rescue when she spotted Cash and penned a post to Facebook that would touch hearts around the world:

“This is what happens when people bring their dog to a shelter and leave them. This guy yesterday morning woke up happy on a couch or in a warm bed, waiting to be fed, hopped in the car thinking he was going to the park or if it was a bad day he was going to the Vet. Instead he went to a place where there are 275 dogs barking to be freed, it smells like death, and doors are banging shut all the time. Animals walk by and never return. And he has no idea his fate. All he knows is he didn’t ask to be here. He didn’t even ask to be born to irresponsible owners. But today he lays frozen in fear, in a puddle of his own urine. Afraid to move, afraid to make eye contact, thinking just maybe he can fade away into this wall. Because if he does no one will see him and just maybe he can escape whatever fate waits for him. This is the reality of irresponsible pet ownership and the shelter system. This is not a shelter issue, this is not a rescue issue. This is irresponsible pet ownership.”

Tammy’s rescue, the Haley Graves Foundation pulled Cash – who turned out to be a girl. They’ve renamed her June and have promised to give her the life she deserves.

June will, hopefully, be available for adoption soon. For now, she’s being treated for parasites and heartworms. It has become clear to her rescuers that she’s faced some abuse. She is incredibly head shy, is terrified of loud noises, has scars on her face, and has apparently delivered multiple litters of puppies. 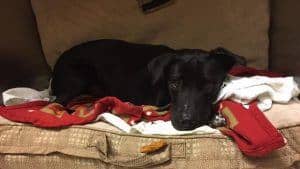 Via The Haley Graves Foundation/Facebook

Tonight she sleeps on her new bed, with her new toys and is eating healthy food. She is happy, warm and safe and is starting to respond to gentle touch and love. She is being treated by a veterinarian but is expected to move in with a foster family very soon.

About posting the original photo of June to her personal Facebook page, Tammy Graves explained,

“When I sat down with my phone and wrote what I felt under June’s photo and posted it on my private page for my friends to see, I received a note from one of my friends in rescue that simply said, “can you make public, I want to share”. I never dreamed the impact one photo and my private thoughts would have. But I’m OK with it. If one dog other June is rescued from a shelter, one dog is spayed, one dog is saved, that is a blessing. America doesn’t see what goes on behind a shelter doors, only a few do. We have the power to change the world, four paws at time.”

June was one of the lucky ones. At any given moment, there are millions more just like her, desperate to be loved.