Over the course of the last several weeks, upwards of 5,000 thumbtacks have been scattered around a popular Northern California dog park.

On January 30, the Hercules Police Department received a call from a dog owner reporting that he’d found about 100 thumbtacks scattered around the Ohlone Dog Park. Over the next few weeks, several more reports came in from dog owners who’d searched and collected thousands more. 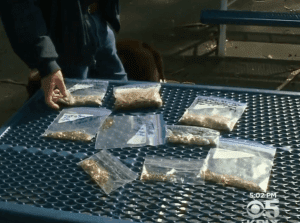 Each time dog owners clear the area, and a nearby creek, of the tacks, the next day the culprit has scattered more. Tacks have even been found in water bowls. To date, around 5,000 tacks have been collected.

Now, PETA is offering a $1,000 reward for information to help catch the person responsible, as well as a $1,000 donation toward the installation of security cameras at the park.

At least two dogs have been injured by the tacks. Police currently have no leads or witnesses and urge anyone to report suspicious activity immediately by calling Hercules Police at (510) 724-1111.