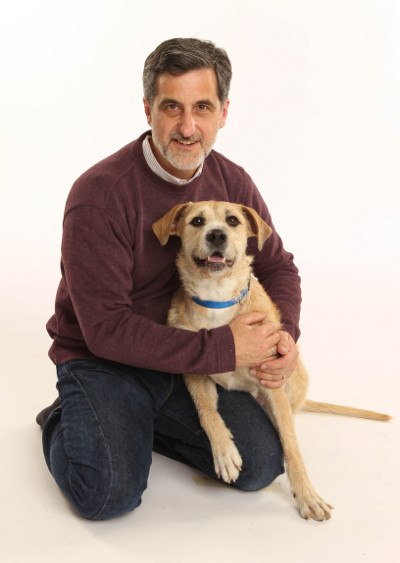 Tony Award-winning animal trainer, William Berloni and Sunny, who plays the role of Sandy in the Broadway revival of Annie at The Palace Theater. Copyright Joan Marcus.

Just over a year ago, in a high-kill shelter in Houston, Texas, sat Sunny, a 2-year old mutt, unaware that in only 2 short days, her life was scheduled to end. At the same time, renowned animal trainer William Berloni was scouring shelters and rescue groups around the country looking for the perfect pup to play “Sandy” in the 35th Anniversary Broadway production of ‘Annie‘. The young, friendly, and outgoing Sunny fit the bill.

Another young mutt, a 1-year old Terrier-mix named Casey, sat in a separate shelter, near Nashville Tennessee. The sweet dog, originally named Porky, was scheduled to be put to sleep but as she was being prepared to be euthanized, the courageous girl broke free from the technician holding her and jumped into the arms of a volunteer. Casey’s desperate attempt to escape bought her just enough time to also be found and adopted by Berloni.

Casey, along with her new dog-sister Sunny, moved into a Manhattan apartment with their adoptive dad, famed Broadway animal trainer William Berloni, and began training for their new role as “Sandy” in the Broadway revival of the Tony Award-winning musical, Annie.

A completely self-taught trainer, Berloni grew up an only child on a rural farm. His animals were his only companions, his friends. Having spent his formative years on the farm, Berloni quickly learned how to work with his pets. But, William didn’t always want to be an animal trainer – he wanted to be an actor. At the age of 19, he got his big break. A producer at the Goodspeed Opera House, where Berloni was an apprentice, offered him the chance to act professionally. All he had to do in exchange was find and train a dog to play “Sandy” in the original production of Annie.

Through a combination of persistence, patience and trial-and-error, he developed his own revolutionary humane training techniques. Using operant conditioning and positive reinforcement, Berloni trains his dogs with cooperation and mutual respect. He never forces a dog to do something it doesn’t want to do, just as he would never force a person.

He explains, “Alpha dogs don’t walk through their pack, growling and snarling, they lead by garnering respect and being a leader that everyone wants to follow.” Berloni trains using regular, flat collars – no choke chains or pinch collars. No pain. No intimidation. Just respect and reward. His dogs perform because they want to, not because they have to.

Mr. Berloni, along with his wife Dorothy and their daughter Jenna, live on a 90-acre farm in Connecticut with Sunny, Casey, and 21 other dogs, all animal actors, each and every one of them a rescue. In fact, in his more than 35 years of training animals for such productions as the original Sandy in Annie, Camelot with Richard Burton, Frankenstein, The First, Alice in Wonderland, Oliver, Anything Goes, Nick and Nora, La Bete, The Wiz, the 20th and 30th Anniversary revivals of Annie, the Madison Square Garden production of The Wizard of Oz, Dinner at Eight, Gypsy with Bernadette Peters, Chitty Chitty Bang Bang, The Woman in White, Awake and Sing, The Lieutenant of Inishmore, Legally Blonde The Musical, Joe Turner’s Come and Gone and The Royal Family, along with hundreds of Off-Broadway shows, television programs, and movies, Berloni always looks for a homeless animal to fill the role.

After the first few minutes of speaking with William, his passion for rescuing animals becomes abundantly clear. He considers each and every one of his current 23 rescue dogs a member of the family, whether they’re working or not.

William told The Dogington Post, “If given the choice between two similar dogs – one sitting in a shelter, and the other in a loving home, I will always adopt a shelter dog for a role.” Shelter dogs are in general no better or worse to train than any other dogs, although some dogs that have been abused or mistreated in the past will make a tighter bond with their trainer, he explained. “With so many great animals available, why would you not use a shelter dog?” 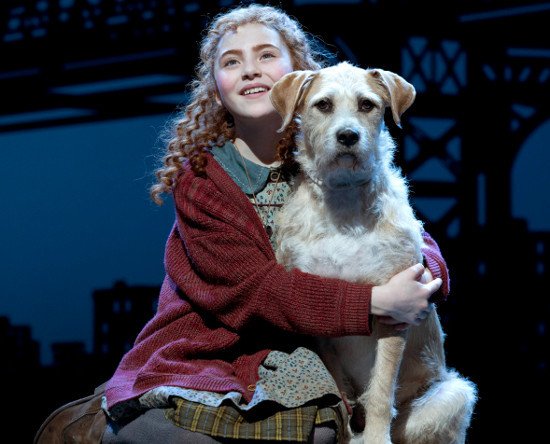 11-year old Lilla Crawford, in the role of Annie, performs on Broadway with Sunny, playing the role of her dog, Sandy. Copyright Joan Marcus.

In the current Broadway revival of Annie, which William calls “the greatest American musical,” Berloni had to not only train Sunny to be an actor, but also had to train the actors to be handlers. Unlike animal actors on film and television, stage animals don’t have the luxury of film editing, creative camera angles, and repeating scenes until they’re just right. Sunny has to perform her role as “Sandy” correctly the first time, every time, and in front of a live audience. “I couldn’t have Sunny looking into the wings at me for her signals, or the scene wouldn’t be believable to the audience,” said Berloni. For her starring role as “Annie”, 11-year-old Lilla Crawford guides Sunny through the scene using hand signals and gestures that Berloni taught her. For some of Sunny’s more difficult tricks, William said, “Lilla does carry a special food reward on stage.”

As the Director of Animal Behavior for the Humane Society of New York, William is passionate about animal rescue and adoption. For the first time in Broadway history,  Annie has partnered with an organization as dedicated to animal rescue and adoption as he is – The Pedigree Foundation. Berloni explained, “Broadway shows are big business these days, often getting sponsorships from major corporations like Sprint or Jet Blue. I’m excited, and it’s a milestone for me, that we have a sponsor that’s doing so much to help homeless animals.”

In a joint effort to promote dog adoption and provide shelters with better resources, Pedigree Brand and Annie have teamed up to help raise $1 million to help shelter dogs find loving homes. For each Annie the Musical ticket sold through December 31, 2013, Pedigree Brand will donate $2, up to $1 million, to the Pedigree Foundation, a nonprofit organization dedicated to helping dogs find loving homes.

“Annie is a timeless American classic,” William explained. “It’s about family values, the economy, overcoming obstacles, and what’s important in life, and now, along with the Pedigree Foundation, it’s helping homeless animals, too.”

To learn more about William Berloni, visit his website at TheatricalAnimals.com.
To learn more about Annie the Musical, The Pedigree Foundation, or to buy tickets and support animal rescue and adoption, visit AnnieTheMusical.com.

An ambassador for pet adoption, Berloni encourages families looking for a new pet to visit their local shelters and to get help being matched with the right dog there. “Anybody could’ve gone into those shelters and adopted the animals that I’ve turned into Broadway stars the day before I did,” he said. “And they would have been great dogs in someone’s home. I just get the opportunity to show that they’re great dogs onstage.”