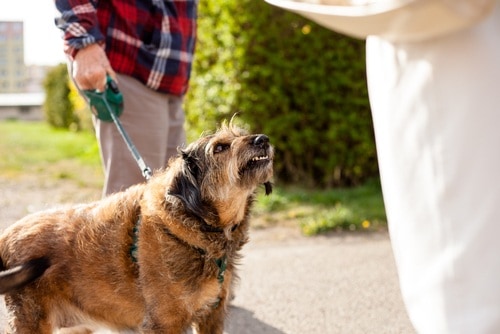 Just like with humans, dogs’ fear levels range from just being slightly worried to full-blown panic. When a dog feels fear but is not in the position to cope with it, the emotions can be translated into barking. Fear barking is characterized by a long series of high pitched barks, similar to excitement barking, but the barks will usually end with a long drawn out bark or howl. During fear barking, the dog also becomes restless and may begin running back and forth, scratching on doors, looking out windows, chewing on something or on themselves, or in some cases they can act apathetic.

Fear barking is loud, repetitive, and penetrating and this is the kind that most dog owners punish. However, it’s important to never reprimand a dog for barking out of fear. Punishing a dog for being afraid does nothing to help him overcome his fear and can often make it worse. 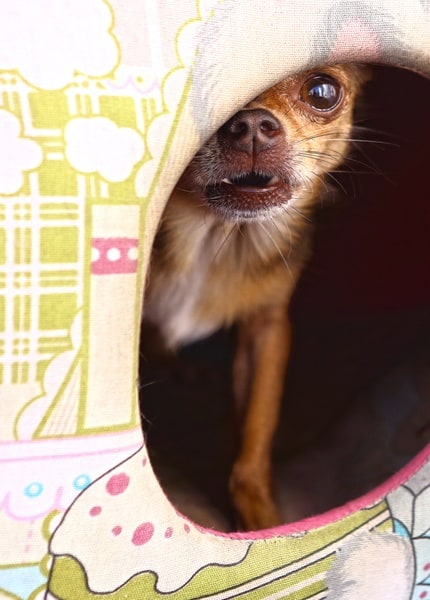 What do Dogs Fear?

Fear is not an inherent emotion in dogs, but rather it is something learned through associations during past experiences. Because of this, dogs can potentially be afraid of basically anything.

Most commonly, dogs fear sudden or loud, startling noises. They may fear other dogs, people they don’t know, or new places and things that they are unsure of. Dogs’ fears vary greatly depending on their past experiences, their level of confidence, and their ability to cope and work through a situation.

Luckily, since fear is a learned emotion in dogs, with patience and persistence, it can also be unlearned.

A Step-by-Step Method for Dealing with Fear

According to researchers and animal behaviorists, the best way to address fear is through systematic desensitization and counter-conditioning.

Training a dog to overcome fear starts by exposing the dog to his source of fear from a safe distance. Or, if the fear is of certain sounds, like thunder or fireworks, exposing him to those sounds at a very low, almost inaudible volume. Then slowly and systematically moving step-by-step towards the dog’s object of fear, or increasing the volume of a sound fear. This process can take several weeks, months, even years, depending on the dog’s level of fear.

This is done in a careful manner so that the dog is not exposed too quickly to the point that he will feel uncomfortable. The dog is rewarding (either with praise, play, or food rewards) during every step of the process to assist in replacing negative associations to his source of fear with positive associations.

Quite often, however, fear barking occurs when a dog is left home alone. This type of fear must be dealt with slightly differently than other fears.

Fear of Being Home Alone

It is important to teach a dog not be afraid of being left alone at home. Your dog should view his home as a safe place.

Puppies or newly adopted older dogs should not be left alone at home for long periods of time, very suddenly, to avoid becoming fearful at home alone, particularly in the beginning. If a dog has already developed a fear of being alone, consider hiring a dog-sitter or taking him to a doggy daycare until this fear can be overcome.

A more long-term solution is to train the dog to visual cues using the hands. Choose a hand signal that you use every single time you leave the house, such as a thumbs-up or an “ok” sign. Show your dog the hand signal every time you exit the door, even if it’s just to check the mail or to step outside for a moment. Use the hand signal, exit the door for a few seconds, then return. As long as your dog has remained calm and not begun barking, reward him. Next time, use the hand signal and leave for a few minutes. If your dog has not become fearful or begun barking, reward him when you return. If he has begun to bark, return to the home, remain calm, but do not reward him. Instead, revert back to the last successful length of time and start again, increasing the time away in smaller increments so as not to elicit a fear response. Remember to always use the hand signal as an indicator to your dog that you will be returning.

How to stop fear barking:

Avoid exposing your dog to his fears, especially in the early stages of training him to overcome them. Teach your dog to cope with whatever he is afraid of one step at a time using the methods explained above. Do not force your dog into facing a threatening situation too quickly. Be aware of his body language and recognize signs and signals that he is becoming uncomfortable.

If a dog is showing fearful behavior, remain calm and act as a barrier between your dog and his perceived threat. Immediately remove your dog or his source of fear to prevent the situation from escalating. Counter-conditioning, or rewarding the dog in the presence of the threat, can be very effective but it should be practiced carefully so that the dog doesn’t think that he was rewarded for barking in fear.

Once you’ve determined what is making your dog fearful and helped him to overcome those fears, fear barking will cease.

What NOT to do about fear barking:

A fearful dog should never be punished for expressing his fears. Do not use electric or shock collars, penny cans, or squirt water at a fearful dog to stop him from barking as these punishments will only serve to strengthen his fear by association. Punishing a fearful dog can also lead him to develop aggressive behavior because his fear and stress has increased to a more dangerous level.

Related Items:dog body language, featured, how dogs communicate, how to stop a dog from barking, stop dogs from barking, train dog not to bark, why is my dog barking