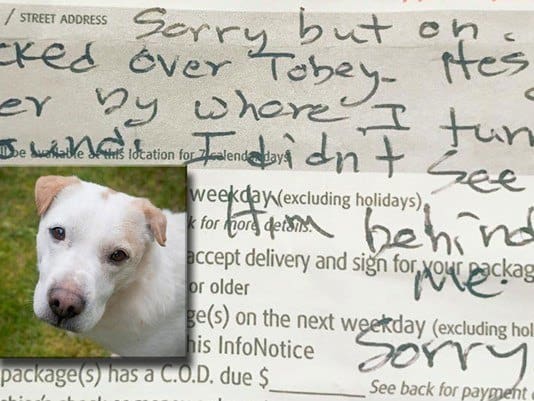 A Washington family is devastated after coming home on Thursday to find their dog, Toby, dead and a note on the front door from a UPS delivery driver apologizing for the death.

According to the note left at the front door, after hitting Toby with his truck, the driver picked him up from the driveway and set his body aside behind some trees before writing the note that read, “Sorry. I backed over Toby. He’s dead over by where I turn around. I didn’t see him behind me. Sorry.”

The driver did not call the family even though there was a phone number on Toby’s collar and on the package he was delivering.

Now, Toby’s owner Cynthia Wakelin is urging UPS to better train their drivers on what to do in situations like this.

“Who does something like that?” Cynthia asked KING. “UPS needs to educate their drivers about how to do the right thing. It’s about more than delivering packages.”

“The driver involved has been disciplined and the company will make a goodwill payment to the customer,” UPS said in a statement. They also apologized to the Wakelins for the “unfortunate incident.”

UPS did not specify how the driver was disciplined, or what exactly he was disciplined for, other than failing to notify his manager immediately following the incident.

The driver’s manager did visit the Wakelin home to offer his condolences. “He was really upset that it was handled this way,” said Cynthia. “He felt really bad because he is a dog owner, too.”

UPS said it is their policy in cases like this to “knock on the door and if no one is home to leave a note.”

The Wakelins were not home when Toby was killed. There have been two similar incidents in recent years where a dog was injured or killed and UPS left notes for the dog’s owners. In all three cases, dogs were unattended outside while their owners were away from home.

While cases such as this are rare, it serves an important reminder to keep dogs secured behind a solid fence or inside the home when left alone.