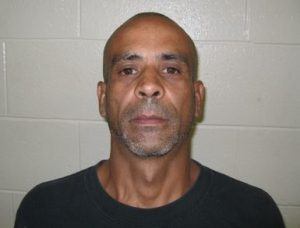 Carlos Alvarez was charged with two misdemeanor charges included animal cruelty and abandonment. He did not serve a single day in jail. Photo via East Providence Police.

More than a year after Indi was found abandoned at the RISPCA, 47-year old Carlos Alvarez of Rehoboth, Massachusetts was charged with animal cruelty.

He admitted that he didn’t seek medical care for the Schnauzer-Terrier mix after the dog was struck by a car in 2009 – two years before he was abandoned at the shelter doors.

Instead, he kept the injured dog, then named Harry, inside a small crate and occasionally applied a salve to his wounds which quickly became infected.

On July 4, 2011, Alvarez and a female friend placed Indi in a box and left him, alone and injured, at the door to the Rhode Island SPCA. Because it was a national holiday, the shelter was closed and no one was there. If not for a concerned citizen, that happened to stop at the shelter that day, discovering his frail, skeletal body, he would likely not have survived the night.

Carlos Alvares pleaded guilty to animal cruelty and abandonment charges in what RISPCA investigators said was one of the worst cases of abuse they’d ever seen.

He served 18-months of probation for his crimes.