Two off-duty troopers came to the rescue when they found an unexpected animal – a dog – stuck inside a tree trunk, unable to escape. 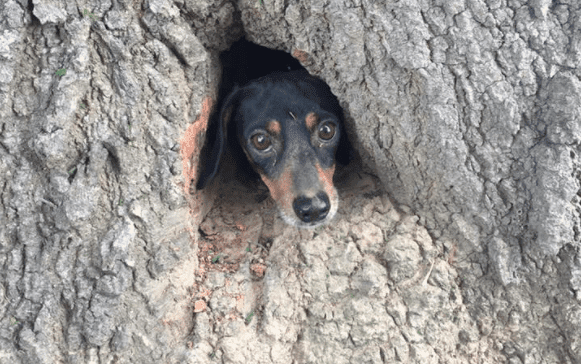 Off-duty Kentucky state troopers Sgt. Michael Williams and Gerick Sullivan were mowing the grass at a cemetery in Salem when they heard a dog barking from a nearby wooded area.

They tracked the barking to a tree trunk where, Rocco, a tiny Dachshund was trapped inside. Apparently little Rocco had crawled through a groundhog hole and made his way into the hollow trunk of the tree only to become stuck with only his adorable face poking out.

With assistance from the Salem Fire Department, Rocco was freed and the tree was given a larger opening in the event that Rocco (or another nosy pup) should find his way back.

Big tail wags and belly rubs to troopers for taking action instead of ignoring Rocco’s barks for help. Without their diligence, Rocco may never have been found.

Rocco has now been safely returned to his family who will keep a closer eye on their nosy pup.