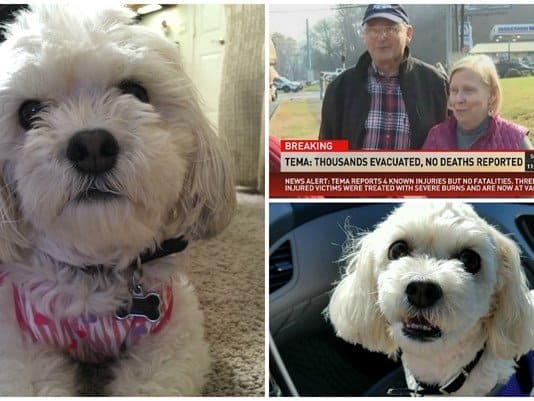 Jeff and Nancy Cook were visiting Gatlinburg, Tennessee when devastating fires broke out on November 28. The couple, who frequently visit from their hometown of Cincinnati, were staying in a rental cabin in the mountains surrounding Gatlinburg. They knew that fires were affecting the area, but were assured by the rental company that they were in no danger, and that it was not necessary to evacuate.

The couple left their rental cabin around 6pm and headed into Pigeon Forge to grab dinner. In the short time it took to head down the mountain and drive into Pigeon Forge only a few miles away, the fires had spread. They were unable to return to the cabin where they’d left their beloved dog, Chloe.

Stuck in Pigeon Forge with only the clothes on their backs, the couple waited several days, hoping for good news about Chloe. So far, there’s been no sign of the little white dog. The Cook’s have recently learned that the cabin they rented, along with their vehicle and all of their personal belongings, were destroyed in the fire. But, there was no sign of Chloe and she hasn’t been turned in to any area shelters.

The couple is back home in Cincinnati now, but holding out hope that they’ll be reunited with Chloe again.

“We’re extremely sad, but holding out a glimmer of hope. Thank you for your kindness,” they told WBIR. “It’s nice to know that people ask about us. We are heartbroken. Chloe wasn’t just a dog to us. She was a very much loved member of our family!”

Officials are asking that anyone who finds a lost animal to bring them to the Sevier County Fairgrounds, where pets are still being housed while they wait to be reunited with owners. You can also contact the Sevier County Humane Society.