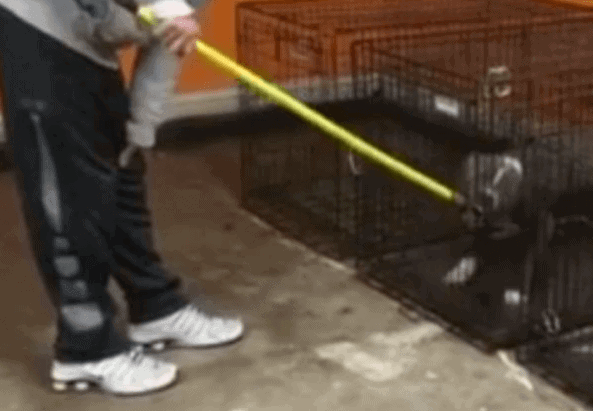 A Long Island dog trainer is under investigation after a video surfaced on Facebook that allegedly shows him abusing a dog at his training facility.

The video allegedly shows Brian DeMartino, the owner of NYDogWorks, repeatedly and forcefully jabbing a broom handle at a pit bull in a wire crate. The dog is cowering, growling, yelping, and biting at the broom handle. According to his profile, DeMartino specializes in training and behavior modification at the board & train facility. NYDogWorks’ website touts DeMartino as an “experienced behavior specialist” who “does not use excessive force.”

The video (available here) was originally posted in the private Facebook group New Yorkers STOP Drugs & Crime before group member Tommy Marone reposted it publicly with the claim that his own dog, a German Shepherd named Zeus, was badly beaten by DeMartino while in his care and is now fearful.

After the video surfaced, another board & train client, Larissa Pacifico stepped forward, saying that DeMartino charged her $2,000 to unsuccessfully train her dog before telling her, “dogs can’t love” and returning her dog more fearful than ever.

And, Milena Apath, a volunteer with Forgotten Friends of Long Island, says the rescue spent thousands of dollars to bring four dogs to DeMartino for training. She told News12 that two of those dogs died, and the other two came back more aggressive than ever.

The Nassau County SPCA is investigating the incident. “We are aware of it and we are looking into it at this time,” Gary Rogers, the head of the SPCA, told Newsday. “At face value, the video is very disturbing.”

DeMartino is scheduled to appear before a judge today on unrelated assault charges, stemming from an alleged domestic violence incident.