A Michigan man says he watched as his neighbors packed up and moved away, periodically returning for furniture and personal items, but leaving their sweet, beautiful dog, Boo, left at the curb with the trash.

For days, Boo stayed right by his former family’s belongings. He never left, confused and lonely, waiting for them to return for him.

The neighbor gave Boo food and water and says he contacted every shelter and rescue in the area, but for an entire week, no one would help the abandoned Pit Bull. That’s when Mike Diesel, founder of the Detroit Youth and Dog Rescue stepped forward. 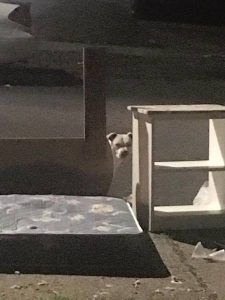 “As far as building up the trust that started Sunday the 16th at 2:30 p.m. when I arrived and I stayed that night until 1 a.m. talking and getting acquainted with Boo and feeding him different food items,” said Diesel.

On the second day, Diesel showed up with two sausage McMuffins and two hashbrowns to eat with Boo but ended up giving the dog both. “It took another 4-5 hours that day before I ended up getting a leash around his neck and then we just sat on the ground and talked for 45 minutes before I had enough trust for him to allow me to pick him up and we went directly to the vet,” said Diesel.

Boo was taken to the Groesbeck Animal Hospital where he’s being treated for heartworms.

“Boo has warmed up to me in an amazing way already and truly shows and proves the Love of the pit bull and Trust they have in humans,” said Diesel.

Diesel created a Paypal account for Boo for those wishing to contribute to his care.